I’ll have to preface this post by saying that I’m no fan of insurance companies. So, if you’re looking for the ‘best travel insurance’, then you aren’t going to find it here.  This is not a ‘how to insure yourself’ post. But, if you want to skimp on the minimum and cheapest way forward, then I’m your guy*.

Cavalier attitude? Maybe. Consider the source before reading on…

Actually, we did consider it before leaving and just didn’t find anything that justified the expense. For the most part – as I understand it – this insurance aims to get you back home, where you will no longer be covered by travel insurance. I’m sure some company has a policy that’s good for somebody… but we passed.

From Mexico on down, we have been covered for nothing. This is a risk we have been perfectly willing to take. Over the past 3 years, doctor and hospital costs for our entire family have added up to about $100 USD.  And, in most countries, a pharmacist can sell you most drugs without a prescription, at a fraction of U.S prices.

If you can get some quotes for family medical insurance that covers international travel for under $100 USD for three years, then please get back to us.  Otherwise, we’ll just carry a wallet.

We’ve only purchased insurance in countries where it is required by law – i.e. Mexico, Nicaragua, Colombia. There might be a few others, and we indicate it in other posts (the Archives section links to the border crossings with info for that country). And, we typically only bought the insurance once we got there (except Mexico, we used www.BajaBound.com before leaving – I think we paid $110 for a 6 month policy.) In Nicaragua, for example, a month-long policy purchased at the border is only about $12 USD.

Regardless of whether or not auto insurance is required in any country – if there is corruption – insurance documents are a common tool the corrupt officials will use to try to get  bribe from you.  If you are a foreigner driving an ‘expensive’ vehicle like an old VW – they may insist you produce insurance documents or pay a big fine. So, keeping an insurance document of some kind is a good idea – even if it’s your old expired one from back home.

When we were in Peru, we met another couple from the U.S. that had been traveling for a few years in a 70’s-era motor home. Obviously, they had big bucks. At one particular border crossing in Argentina, they ran into a scam and were ultimately forced to buy ‘insurance’ right at the border post. They paid good money for the terribly forged document you see in the actual scanned image below (altered to protect their identity).  After they realized the document was so bad it wouldn’t convince any local cop they had actually paid for it, they generated a new fake document based on the original forgery. They gave it to us and told us it was their goal to make this the most popular fake insurance form for overlanders out there.  We’ve since learned that some overlanders call this ‘self-insured.’ We never got around to posting their document… so, fill in your own info and…  here you go.  It works. You’ll just have to trust us.

Of course, we would never suggest that anyone use fake documents. If you are trying to avoid a corrupt official, then proceed at your own risk. Never attempt it when a real accident or injury is involved.

In general, Latin American countries are ‘at fault’ states. If you get in a wreck – it’s your fault. Insurance – even if legit – is not a “get out of jail free” card. There are horror stories out there – of someone’s life’s savings being drained to pay lawyers and families to make the accident ‘go away’ –  but we’ve also found that people just love to tell horror stories. You’re a grown-up: you figure it out. 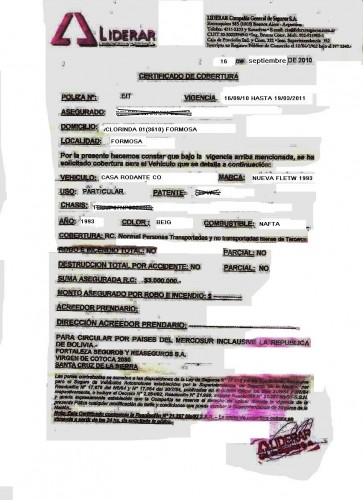 * This is not advice. Do your own research.