We would love visit someday, but this particular arrangement was for cash.

I wrestled with this decision a bit more than I should have. When I was younger, I was always quick to label my favorite bands as ‘sellouts’ as soon as they became popular, hit the mainstream, or showed up as background music in a commercial. Of course I wished them success, but somehow without ‘selling out to the man.’

Now, of course, I have a finer understanding of economics. And, expenses.

This is not our first dalliance with commercialism. There was the short-lived Google Ads Experiment. We made several hundred bucks in a very short period of time. It was too good to be true.  I still don’t have a definitive understanding of why we were permanently booted. Their policy is to not disclose the reason. We’re still banned. And, the way I see it, they still owe us some money.

A few years back, I took cash to place a link on our vehicle page for a British insurance company. They contacted us, and I figured nobody would see it anyway. A few more hundred bucks in the bank. A month later, I removed it. It’s easy money, really.

Since then, I’ve still been getting solicited. Mostly bad deals, and I’ve ignored them. Besides, we’re not sell outs.

But, we’ve been spending more time thinking about costs. And, 6 expensive months in Brazil. And, maybe a trip to Africa. Europe. Asia. Our plan for funding it is just as poor as our plan for doing it.

Since our donate button hasn’t produced any major windfalls, we’re going to think harder about generating some income through the blog. Maybe that book will actually happen. We might start shooting some video and trying to hock it. We might… uh, any other ideas?

The Cuba Ad just landed in my lap and I took it. I made $140 USD in 5 minutes. So, sorry for selling out to the man. I feel dirty. Since some of our friends actually thought we went to Cuba, I feel even dirtier. I don’t know if we’ll do it again, but we might. At least we hope you will take comfort in the following graphic: 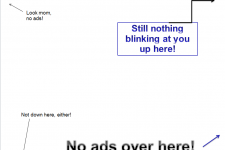