We said goodbye to Bree and Ray as they headed off to have a more luxurious end to their vacation before returning home to the Bay Area. Good thing, as we had an fairly inglorious departure from Montezuma.

There is a very steep hill just outside of town and we simply couldn’t make it up. Naturally, there was no one else on the road, so I just put it in neutral and rolled all the way back down to town backwards.

Angela and Bode went off to find ice-cream while I went to work. Valves were fine. Timing was good. The mixture on the right carb was off by a full turn. Weird. The right side of this engine is possessed.

We gave it another try and powered up the hill in 1st gear like a champ. 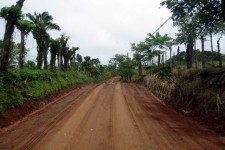 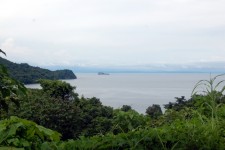 Most of the roads around here are dirt, so guidebooks and strangers give plenty of warnings about driving without a 4×4. I still don’t quite get it – we’ve been fine so far, even though it rains daily and this is supposedly the worst time of year for the roads. Granted, we haven’t taken any routes that require fording rivers, but still, just because a road isn’t paved doesn’t immediately mean that four-wheel drive is required.

However, we did manage to vibrate another shock loose after a few hours of bouncing all over these roads. Easily tightened back up.

Anyway, on to today’s story…

We pulled over to a soda to have some lunch and order up the usual casado. A few minutes later, a guy with long gray hair and no shirt walks in and makes a bee-line right for us.

“You must be the gringos from California!”

Yep – that’s us. He spotted us a few kilometers back and turned his truck around to come find us.

Of course, he had his share of old VW buses over the years and wanted to chat. He joined us at the table and introduced himself as Wayne. 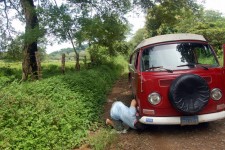 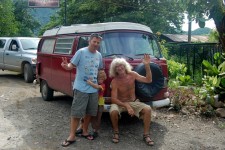 I like preposterous theories, so there’s a theory about anyone named “Wayne” – especially if it’s a middle name – that could apply here. Think serial killers.

It wasn’t even five minutes after sitting down until Wayne tells us that he indeed, has killed a man. Right here in Costa Rica.

He spent most of his life in Minnesota and had a large piece of land near a lake. Life was good until his property was annexed by a nearby town and he had to start paying property taxes he deemed egregious. He sold the property – sold everything – and drove down to Costa Rica to retire.

He told us he paid over $5000 USD in bribes to corrupt border officials and police on his drive down here. I told him I refused to pay a $5 bribe in Honduras and walked away without being thrown in the slammer. He didn’t skip a beat and kept on talking.

He bought some property down here and proceeded to build a house and start retirement. It wasn’t long after that he went to some sort of Christmas party at a local establishment and on his drive home – at 1 am – struck and killed a man who he claims was sleeping in the road.

Things get fuzzy here, but after some brief jail time (2 days, coffee and food was good) he hired a lawyer. Over the next two years he made continuous payments to the lawyer, made donations to the local police force, and payments to the family. When he was finally literally out of money, the whole mess was ruled an accident and  the case was closed. Now a free man, he was effectively stuck in Costa Rica with no money or any way to get back to the US.

He does handy-man type work and seems to be building a business here and getting back on his feet. It’s hard to tell if he likes it here or not and claims that all the ex-pats here are drunks and pedophiles – rejects from the US. We didn’t ask which one he was.

We bought him his cup of coffee and thanked him for the conversation before continuing our way up the peninsula.

I wonder who we would have met today if we were driving a Toyota?

6 thoughts on “We Attract ‘Em”