I have to admit, I wasn’t completely thrilled with my anniversary gift this year. Considering we normally don’t exchange gifts, perhaps I am being harsh.  Traditionally, 14 years of marriage is celebrated with ivory. I’m sure Jason had the endangered animals in mind when he presented my gift. A pink plastic funnel in a clear zip-loc bag sent all the way from China. I’m not sure how much he saved by having a female urination device sent straight from the Far East without packaging rather than buying in on Amazon, but I know he did the math.

Even though this gift had the potential to make my life a lot easier, Jason saw my displeasure at the questionable packaging on my P-EZ and immediately ordered the Go Girl with a fancy bag.

By the time that arrived, the idea of using a standing pee device that came in a sandwich bag had grown on me. As I’m telling some girlfriends about my anniversary gift, the question comes up “why would you need this?”  What?!  Granted, they live in homes with bathrooms, but come on! Don’t you camp? Don’t you go to music festivals and sporting events with disgusting port-a-potties? They started to see the possibilities. Though I do think I lost them somewhere into my “sleeping in the car while waiting on a morning ferry, or waiting in line for gasoline during a strike”…you know, sometimes there just isn’t a bathroom. Of course sometimes it is just cold… or raining… or both. With careful consideration of beverage containers on those days, the boys don’t seem to have a problem with this… I usually do.

And so, one day I decided to exclusively use my two female urination devices and compare them. I mean really, I only have room for one, so why not take the best?  Both the P-EZ and the Go Girl are similar shaped silicon funnels. The Go Girl seemed to be a little better quality. One side fits, well, you-know-where (see diagram) the other side is an pseudo prosthetic penile aiming tube that allows a girl to pee standing up.

With great trepidation, I tried the Go Girl first. It felt really weird to stand in front of a toilet. Really weird. But lo’ and behold, I peed right into a toilet without sitting down. Hot dang.

A few glasses of water later, there I am again with the P-EZ. But wait, things are a little crazier this time. Much more aiming involved here. Hmm, it took me another try with the Go Girl to realize it wasn’t me. And, with a little more investigation, I discovered the small difference I should have noticed a lot earlier. The size and shape of the exit pee hole.  Engineering makes a big difference here. The Go Girl wins.

OK, so there you go. A whole post on something I’d never dream I’d talk about, much less write down for the world to read.

I was really wishing I had it at a tailgate party I attended several weeks ago, and there have already been a few other occasions when it may have come in handy. So, it’s coming back to South America with us. Let’s see if this product becomes critical in my lifestyle. We’ll know in a week or so!

Because the biggest adventure shouldn’t be finding a bathroom. 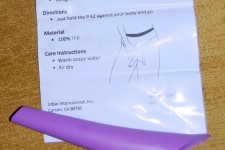 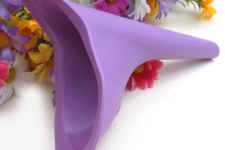