We made it to the shores of Lake Cuitzeo, the country’s second biggest lake. It wasn’t ideal, but it was getting late so we convinced the workers of a shoreline restaurant to let us camp there. They had a playground and a trampoline, so Bode and Luca played until late in the evening. Unfortunately, they started a game of tugging on each other in the back of Emma (Luca’s bus). Bode complained of his arm hurting, but then started laughing and playing again. 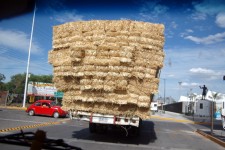 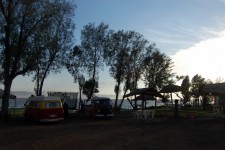 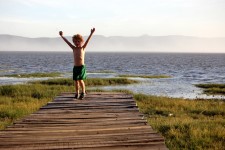 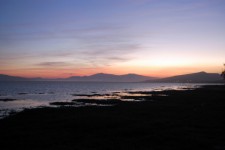 When he came back to our bus, his arm was dangling listlessly and he was in serious pain. Two years ago he had a similar injury. Back then, the clinic called it “Nursemaid’s elbow” and after a couple of tries the doctor popped the elbow right back into place.  So once again, there he is with an arm that he can’t move and if he does move it, it hurts. 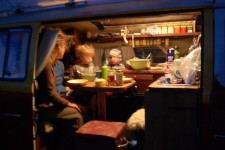 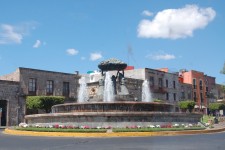 We knew we had to find a doctor, but we were literally locked into the restaurant’s parking lot and didn’t know where we would go anyway. After a long night, we headed to a clinic that was in Morelia, just 20 miles away. We tried to explain to the doctors what we thought it was, but without a translation or a real medical term for ‘Nursemaid’s Elbow’ it was a bit futile. We were just hoping it was as common here as in the US. Apparently, it’s not.

First, X-rays. Not fun for a kid whose arm hurts when you move it. By the way – no lead jacket or anything, he just sat on Jason’s lap. $200 pesos. 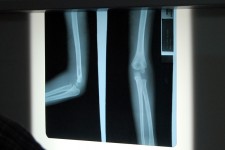 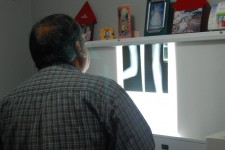 Then, a doctor looked at the x-rays, saw there was no broken bone and told us it wasn’t broken. Si, si – we know! We pointed to the big gap between one of the bones in his lower arm and the joint and tried to explain our theory. He wasn’t buying it. He looked at Bode’s arm and left the room.

It was quite stressful because we didn’t really know what was going on. Then, another doctor would come in and do the same thing. After 4 doctors did this, we were finally told that a specialist was coming in 20 minutes. He came and performed the same x-ray review, then grabbed Bode’s arm and twisted it painfully as if he were pulling the leg of a Thanksgiving turkey. Bode screamed and cried as it was clearly painful. The specialist then announced, ‘Esta bien…no problema.‘ 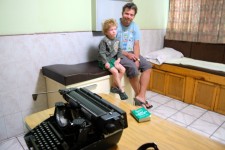 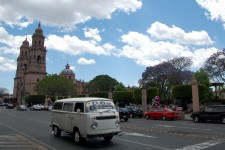 We thought they said they needed to put a sling on it but came out with the plaster and gauze for a cast. Two nurses started to get busy prepping the plaster. We insisted ‘No quiero!‘ We knew it wasn’t necessary since we’ve dealt with this before. After a bit of discussion, they agreed. They told us if he could keep his arm rested for 2 weeks, it would be okay without a cast. Getting Bode to rest is tough enough, but we can’t imagine what it would be like with a cast (at the beach, no less.)

We paid our doctor bill ($500 pesos,) so the grand total including the X-rays was only about $55 USD. It took a bit longer to diagnose and treat than we would have liked, but it could have been worse. We made him a sling and struggled to get him to wear it. After a few hours it was still tender, but by the end of the day he was completely fine. 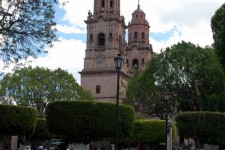 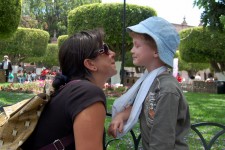 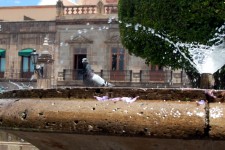 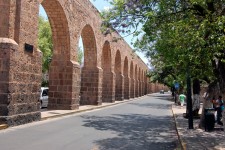 We met up with our friends in downtown Morelia and toured the city. It’s a nice clean colonial city with aqueducts and VW bus taxis everywhere. It’s another university town without many tourists. One of our guidebooks referred to Morelia as the “coolest town you’ve never heard of.” It wasn’t apparent, but it had been a long day and we were way too exhausted to find out . 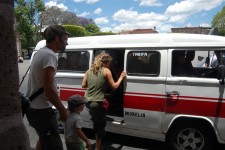 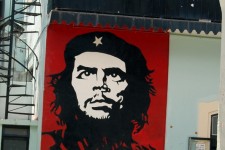 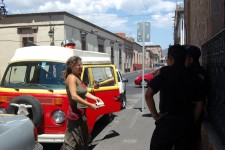 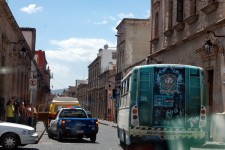 We headed back to the vans and we reached Emma first. All the doors were unlocked. Despite having some anti-theft measures that prevented the crooks from opening the front doors, they did manage to get in through the sliding door. Someone had broken in and stolen their laptop. Luckily, that was it. Unfortunately, the laptop had all their photos of Mexico (3 months,) Ane’s book she’s writing on stone carving, and lot’s of other info (their external hard drive was stolen too.) The crooks didn’t take any cash or any other valuables.

Of course, we ran off to go check our bus. Fortunately for us, Red Beard was fine. In the end, the police told them there was no way they were going to find the crook or the laptop (the same thing we were told by Alameda police after getting burglarized at home.)

The day was a disaster, starting with a hospital visit and ending with a police report. We still haven’t heard whether Jason has an amoeba, but he’s starting to feel better. We were all ready to get somewhere and call it a night. On to Lake Patzacuaro.

6 thoughts on “Doctors and Police”