On our last morning in Manaus, we went on another wild goose chase with some guys from the club, looking for a distributor. Again, no luck. At least we got an escort to the city limit.

We only went as far as Presidente Figueiredo before calling it a night. The Reserva Waimiri-Atroari is just north of here and the road is only open 6 AM to 6 PM. The next morning, we made a break for it and drove the 150 km across the reserve with no stops – we couldn’t if we had wanted. It’s all jungle – there wasn’t a single place to pull over. I did see one road with ‘do not enter’ posted all over it, so  I guess it led to an indigenous village.

Much farther down the road, we crossed the magic invisible line. The first time that Red Beard has been in north of the equator in two and half years. There was an accurately-placed monument, but for some reason it looked like a hockey stick. 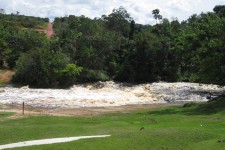 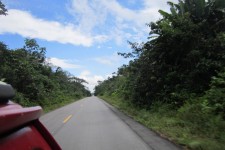 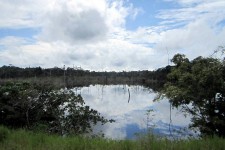 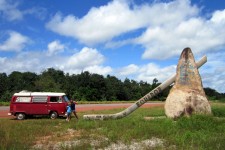 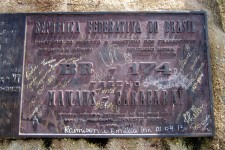 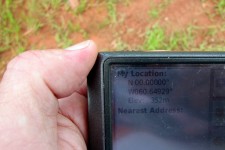 Our 600 km day ended in the farm town of Boa Vista. Not much going on here.

The next day it was another 300 km or so to the border town of Pacaraima. Again, not much to look at on the way. We at least managed to climb up 1000 meters in altitude at the border, so the scenery has changed a little bit.

Checking out of Brazil was a little more effort that we expected. For no particular reason, handing in our car papers took almost an hour. We were the only ones there, so it must have been a new guy. Our vehicle document was stamped out in triplicate. Then, we were just in time for the exit aduana to close for lunch. So, we killed an hour waiting for the office to re-open to stamp our passports. Five minutes and we were done. The exact day our visas expired. 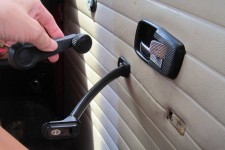 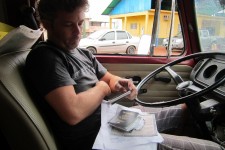 Venezuela is 30 minutes behind Brazil, so we had to wait a bit for it’s office to open after lunch as well. One of my favorite wacky dictator power moves is to invent your own time zone, and Chavez went for it. I’m not sure why you would choose 30 minutes, though. I would go with 12. Definitively twelve. If you’re going to arbitrarily impose authority, I say make it arbitrary. No more Mondays – let’s do Tuesday twice!

When the officer asked us for our hotel reservations, we didn’t have a good answer. Oops. This seemed to be a snag, but we eventually invented a hotel name and he decided we weren’t very interesting and that was that. You’re supposed to have proof of itinerary and an ‘exit ticket’ from the country, but we got off easy.

Getting our Venezuela car papers was the biggest deal of the day. We had all of our documents, including our ‘international vehicle insurance‘, but it still took an hour and a half. No reason. You just fill out all the papers and wait. Still, it seemed that the bigger wait might be for the folks returning to Brazil. 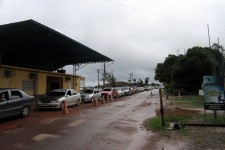 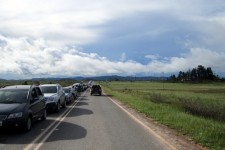 2 thoughts on “Crossing the Equator and a Border.”