As you read this, we are probably somewhere with our toes in the sand and enjoying a cerveza. I just thought I would share a sample of the discouraging emails we have received regarding our travel plans south of the US border.

We’ve heard plenty of this, and it does generally seem to be from people who haven’t actually traveled in Mexico. This one stood out in particular because a) it was a tome b) it’s completely second-hand hearsay and c) the xenophobic bias seems to extend over the author’s entire lifetime.

References like “Many years ago, I worked with a man who knew a family” and “Several years ago, I talked online with someone” and my favorite “.. and cell phones weren’t even invented, yet” just make me scratch my head.

We honestly appreciate the concern, but, ummmmm, yeah.  Enjoy.

I don’t want to put a bummer on your trip, but if I were you, I’d stay clear of Mexico. It’s VERY dangerous, right now. When I say, “right now”, I mean, for the foreseeable future. There are a lot of very dangerous people down there, kidnappings for ransom are commonplace, and they will not hesitate to cut off fingers, torture and kill you.. or anything else which comes to their mind. NOT a place to take a young family.. Don’t expect help from the police. Some of them are in on it. I kid you not. Several years ago, I talked online with someone on the list who used to build surfboards with his son. He and his son went to Baja about every two months to surf, and they had done this for a few years. Then, once, they were sidelined by some bandits and had machetes put to their throats. They really thought they were going to die and said goodbye to each other. Shortly, the bandits left.. But, it does not always end so well. They never went back, and his advice to me was to stay away.. But, he said, “if you must go”.. to NOT travel at night, or on Sundays. Basically this is when the police are sidelining as bandits, the drunks are on the road, and cows crossing the highway cannot be seen. If you get into trouble down there, anything could happen, and it might not be good. I was terribly disappointed to hear all of this, because I had long entertained the notion of retiring in Mexico. “Mi amigo, asi es muy peligroso”.. My friend, it is very dangerous.
Not so long ago (a few months), there was a talk show program where callers were contributing their own personal horror stories of travel in Mexico. One was REALLY bad. A family went down there in an RV, looking to camp. They got lost, asked for directions, and were pointed right towards trouble.. a remote village or camp, where they could not turn around, out in the middle of nowhere. And, since nighttime was approaching, they decided to park and rest for the night. They assumed the people were friendly.. WRONG!!! In the middle of the night, they were awakened by loud pounding on the door. Strange men were demanding entry, and not in a friendly way. When they did not open up the door, shots rang out and windows were broken, the vehicle was penetrated with bullets. Left with no choice, the man opened the door, and several men came in.. starting going through everything, looking for things to steal. Raped the wife.. they took turns, while the husband watched helplessly. They beat his ass, and finally left. Lucky these people lived. They prepared to leave immediately, driving in the dark. When they went to report the crime at the local police station, they were told that they could not leave Mexico until the investigation was over.. which dragged on for weeks. Finally these people decided to head for the border, and were turned around there by police and made to go back to the town where they had filed a report. It was a huge mess!
Many years ago, I worked with a man who knew a family who went camping down there with some kids.. a church group. Only three adults along. When they got there and dropped the kids off with at the camp, they had to go to town to buy fresh food and provisions. Along the way, they saw two children on the road. They picked them up to take them into town. All the money for the trip was in a pouch on the dash. When they got into town, those kids grabbed that pouch and dashed through a crowd, taking advantage of a street signal to make their getaway. One of the two adults along chased the kid with the pouch and caught him.. But the kid started to holler like hell, and pretty soon, here is a policeman, arresting him (and taking possession of the money). Now, the other adult gets involved, trying to explain, and he gets arrested, too. Both go to jail, and the bus is impounded. In Mexican jails, you are not allowed to call anyone… and cell phones weren’t even invented, yet. So, here are all these kids, sitting around hungry, and the one adult with no ride, waiting and not knowing what happened. Finally they put it all together, somehow.. But it was a mess. And, when they got the money pouch back.. It was empty. This is a true story.
So, my advice to you is to just stay the heck away from Mexico. It’s a fine place to go if you fly and go directly to a resort area, and stay there. Traveling around the country.. Well, you take your chances.

If you do go, I sincerely hope you have a nice time and no troubles. But, it’s even more dangerous now, than it was a few years ago. So, think about it.

They then sent another e-mail 8 minutes later and decided to write off an entire continent.

Please read and do more research before you go south of the border. I had forgotten to mention that it is also very dangerous in some regions of South America. Again.. Your chances are not so bad if you travel with someone who is “savvy” and know people who can look out for you when you get where you’re going. Best bet is to fly directly to a resort destination. Mexico City is a mecca of kidnapping, but there is a lot of trouble along the border towns and districts, too. 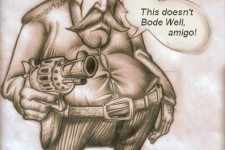