Thank goodness we have a camping guide because otherwise we would never have found the camp site in San Miguel. It was right in the middle of town, but there were no signs and a big solid fence around it. We rang the doorbell on the outside fence and 5 minutes later someone came out and opened the gate to let us in. It also happened to be a tennis club, but again I’m not sure how anyone would find it. Starting very early in the morning, the gringos show up and play tennis on the 3 clay courts. I guess you don’t need signs after all.

The only other campers there were German, in a huge tank-like vehicle. The could have driven through the Sahara desert in it, but they had been parked in San Miguel for a year. Interestingly, they only had a small mat and 2 camp chairs outside their truck. It made the entire outdoor living room/kitchens of the folks that come down for the winter seem even more ridiculous. 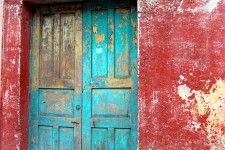 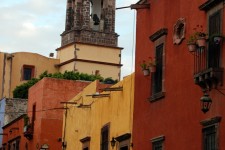 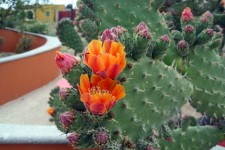 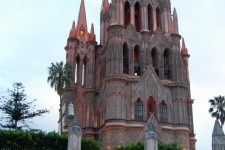 Jason’s stomach issues from last week seemed to be coming and going. He’d never fully recovered. Bode and I left him behind and set out to meet up with our friends Ane, Andres and Luca. We returned with them late that afternoon and suggested he go to the doctor. He finally did and was told it was either an infection or an amoeba. He’s got meds for the infection, but had to go to the lab in the morning to test for the amoeba. He was given a cup and told to poop in it (at least he thinks that’s what they said – the people at the lab may be very surprised when they open it.) We’re all kind of hoping he has an amoeba. It’s cured with 1 pill, but I told him it will make better fodder for the blog if he has a little friend living inside him. I’ve named it Al, and ask him about it every day. We’re still waiting on the results.

We all stayed at the campsite a day longer than we had originally planned to let him recover a bit. It was a also a good opportunity to finally get rid of that pinata we’d been holding on to since Bode’s birthday. Not sure what the couple in the tank thought of us. 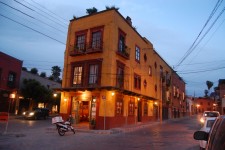 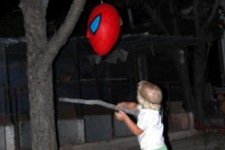 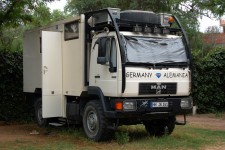 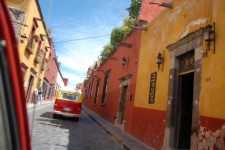 San Miguel looks a lot like Guanajuato, but bigger and with more gringos… lots of foreigners live here. There are tons of art galleries and boutique hotels. It’s easy visit and live here because everyone speaks English. But, the streets are not bustling with locals going about their business like other Mexican towns. There are only a few people on the street selling fruits, vegetables, plasticware, bread and donuts (yeah, I don’t get that one either, but Gto was full of donut salesmen walking the town). Otherwise, the streets are pretty empty and lacking the vibrancy of Guanajuato.

Finally, we headed out of town with the Bulli’s on the way to the coast. Our first stop was at the hot springs just outside of San Miguel. It was a little more built up than we expected, but very cool. Bode had a great time in the 3 pools. One pool had a 30 meter tunnel that lead into a grotto, lit only by a few holes in the roof. This relaxing afternoon was a great way to wrap up our time in San Miguel. 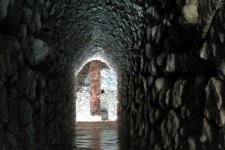 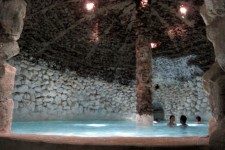