Or…  The Storia Victoria.

The 8:20 ferry from Port Angeles to Victoria, B.C. requires that you get in line and park your car at 7am. We’re not morning people, so this was a challenge. There is nothing like having to get up really early to ensure you don’t sleep well. We bundled up, got some coffee and sat in the van for an hour and half in the ferry parking lot. No firewood allowed into Canada, so we added ours to the workers’ truckload of it. I’m sure that the workers take the truck to the other side of town and sell it to the Olympic NP campers.

Finally, they started loading. Oops, the car won’t start. Jason mentioned he’d read not to wait for the ferry with the radio on, that it would drain your battery. Now we know that is true. We must have a short or some other electrical issue too, as the radio shouldn’t drain the battery in an hour. One more thing for the list. Luckily, the nice folks working there had a portable battery jumper thing. Must happen all the time. Still, we got the eye rolls… dumb Californians in their hippie van. 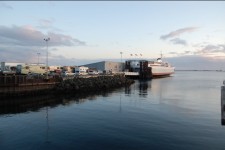 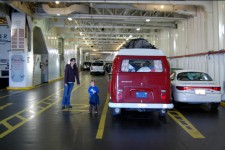 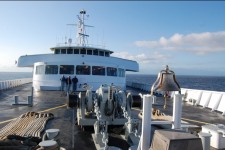 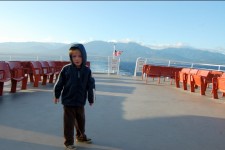 A fairly quick trip across the straight with no whales spotted.

We had made the decision to head to Canada late the night before. We originally thought we were going to go to Seattle (which we will probably still do), but our  hot springs friend said it was a better ferry/customs experience from Port Angeles than from Seattle and he was right. Customs was a breeze, though they did question our van making it up from California.

We realized after about 10 minutes in BC that we were not quite prepared to be in another country. Our GPS did not have Canadian maps loaded on it (shouldn’t “North American Edition” include Canada too?), we had no money and couldn’t find an actual bank, and our cell phones weren’t working.  Oh well.

Anyway, the night before we had gotten a comment from Anne-Marie in Victoria asking if we were headed her way. Why yes we were…

She works for the Legislature at the Parliament building – the beautiful building in all photos of Victoria.  We were to meet her there for tea. That’s right, we get off the boat, get a special tour of the most gorgeous building in Victoria, and have tea in the private legislature dining room. Nice way to get introduced to a new country! They do this for everyone, eh?

Anne-Marie is planning an extended trip with her teenagers next year. Her plans sound incredible: India, Cambodia, Italy, and a bike-barge trip that sounds awesome. I want to go!

After tea, we walked around Victoria some more, hit their Chinatown and got some dim sum. In true tourist-town style, there were buskers everywhere, currency exchange counters,  and multiple ice cream shops on every block. We got back in the van and did the scenic drive around the town before heading up the eastern coast of the island. We were still unsure of our plans once we hit Nanaimo: either ferry to Vancouver or go across the island to Tofino.

Before dark, we were all exhausted so we stopped at a motel “with sea view” and called it a night. We went to bed thinking Vancouver, but in the morning we had a suggestion to see Salt Springs Island. That’s pretty much how the trip is going – a daily decision on where we are headed that changes hourly until we get somewhere. 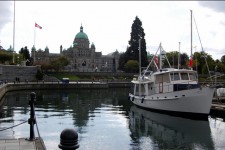 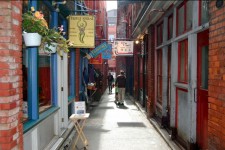 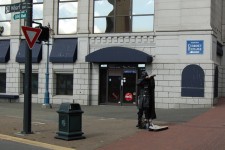 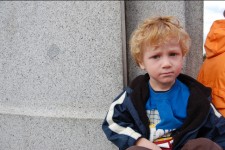