After several days in Otavalo, it was time to move on to Quito. The weather was pretty dreary while we were here, but it cleared up just enough for us to see one of the volcanoes on the way out. 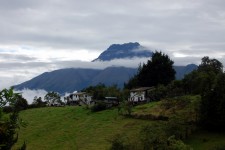 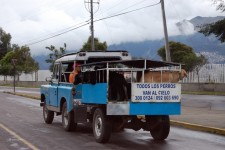 The drive down to Quito was another nice high-altitude drive through the mountains. I had the GPS on the dash so I would know about when we crossed the equator. It was a non-event. I was expecting at least a sign or something, but saw nothing. Just around the next curve was a police car parked on the shoulder – presumably to wave on anyone who considered stopping.

This section of road was part of a ~1000 meter winding decent, so I guess I understand why they don’t want yahoos stopping to take photos in the middle of the road. Those yahoos should go take their photo next to the tourist trap equator monument north of Quito.

Guess where we went next. 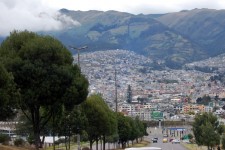 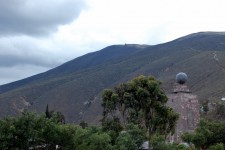 Completely out of our way was the Mitad del Mundo – maybe a half-hour north of Quito in an ugly industrial area. We paid to park. We snapped a few photos. We told everyone selling stuff  ‘no gracias‘ and then we left.

You would think this might be a source of embarrassment, especially since they built a huge brick monument to commemorate it. Instead, we are supposed to be amazed at just how close they got without modern instruments (it was measured in the 18th century.) Fair enough. 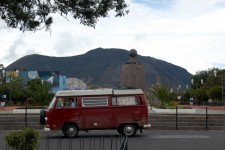 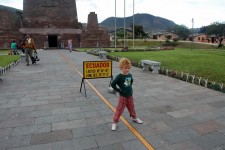 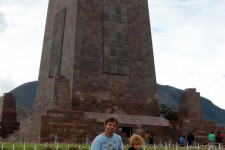 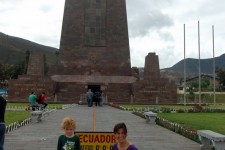 The best part of the whole thing was actually standing there and reflecting for a moment.

We drove to the equator. Cool.

3 thoughts on “This is not the Equator”