Before we left Chiclayo, we wanted to visit the Museo Tumbas Reales de Sipán, which is just down the road in Lambayeque.  It’s an amazing place that doesn’t allow photos. We were even frisked before entering.

It contains some of the discovered remains of the Moche civilization (A.D. 100–850).  Like the Egyptians, they built pyramids, but used earth bricks instead of stone. Over the centuries, the pyramids have eroded to point where they just look like the hills that are scattered all over the area. Archeologists didn’t know about them until the late 1980’s, when the local police found grave-robbers shooting each other while fighting over their loot. There’s more gold here than King Tut’s tomb. 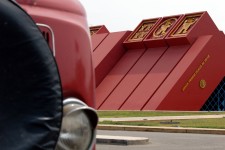 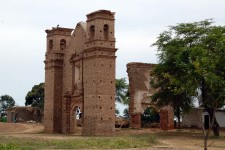 Next, we decided to take the detour to Zaña to see the misnamed “ghost town.” There are actually plenty of people that live here, but the town contains the remnants of an old Spanish Colonial city that was sacked by English pirates. 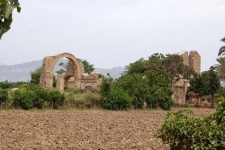 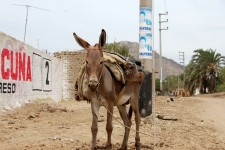 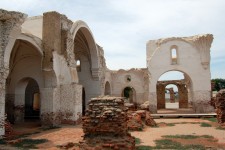 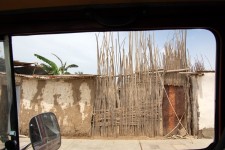 It was an interesting stop if you like to see crumbled churches (okay, so we do).  Maybe more interesting were the more recent structures around the town. 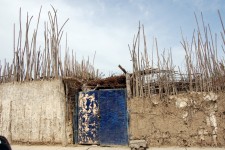 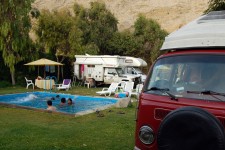 Finally, we made it south to Huanchaco – a beach town near Trujillo.

Unlike anything we have seen in South America (so far), this town has an “RV Park” which is really just a grassy area behind a hotel next to the pool. We were a bit surprised to find two French couples already camped here.  They’re headed north. 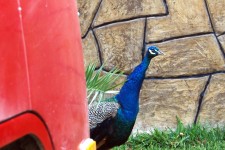 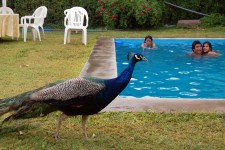 It’s an odd setup, but still pretty comfortable. There are kids running circles around the bus all day, as we are parked about 5 feet from the pool. There are two peacocks, two turtles, and two dogs (both named Tony).

And, we have to ask if there is an empty room at the hotel if we want to take a shower. This week, it’s booked. We’re glad there’s a pool.