Mancora was sponsoring a bikini contest tonight, so we took that as our cue to leave. The thugs and over-testosteroned idiots were already showing up and making their presence known on the beach. It was tough to tell if we were in Peru or New Jersey.

We left Mancora and didn’t know how far we would end up going today. We had thought we would just check out another beach town only 10 km away – Organo –  but after such a short drive, we thought we should keep going.

Since the highway was near the beach, we were expecting to be able to pull off anywhere for a swim and possibly to camp. That didn’t happen.

We weren’t too far out of Mancora and everything turned dusty. The roads are filled with trash – worse than anywhere I’ve seen (and that’s saying alot.) We did pass one actual trash dump, and I suppose that was the source of the problem. The problem being that there was absolutely nothing preventing the high winds from blowing the trash all over the desert for the next 100 km or more. Sad. 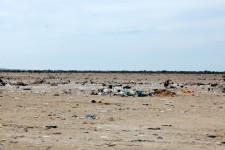 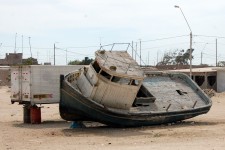 It;s also strange that there are a lot of boats for sale in the desert. None of them looked like they would spend more than 2 minutes afloat.

We detoured from the Panamerican to check out a couple of fishing towns, but they weren’t quaint… more industrialized, so we passed.

Finally we found Yacila. We were actually trying to get here – you won’t come across it otherwise.  But, when we got there, the roads were blocked and we couldn’t get to the beach. It was a pirate festival (!) and this little sleepy fishing village was full of drunk locals from Piura. Not a single tourista in sight. 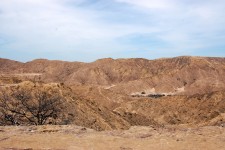 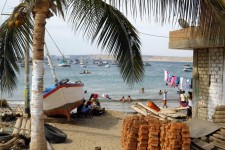 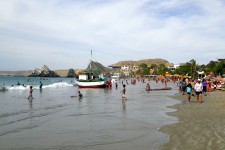 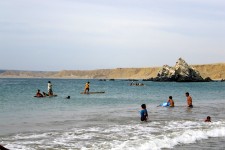 There was no safe place to camp and only 1 hotel that we could see – and it was booked. We talked about it for a while and Jason and Bode walked down to the beach to check out any other possibilities.

It was late afternoon, and most of the adults were stumbling drunk, but it did look like everyone was having a great time. There was a wedding at the other end of the beach, a giant sand dune with kids rolling down it, and a tree loaded with toys in bags (?)

We really wanted to stay here and enjoy all the merriment (piratas!), but nothing was falling in place. We decided it was probably not going to be a restful night even if we could find a safe place, so we hit the highway again. Jason is already wanting to come back. 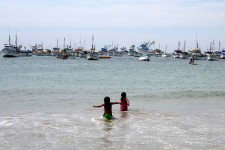 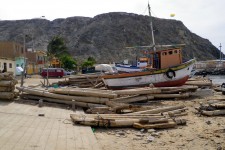 We drove into Piura and did a quick look around and again, we just weren’t feeling it.  We were 3 hours from Chiclayo – the next town – and the sun was setting. The wind was really blowing, and there was dust and sand everywhere.  We decided to break our ‘no driving at night’ rule, and thought it would be okay just this one time.

Then, the crazy drivers came out.  Everyone flashes their brights back and forth and absolutely no one dims their lights unless you can optically blast them off the road – it all seems to be part of the game. Trucks were passing buses and taking up the entire road. Coming right at us head on and absolutely not getting out of the way. Luckily, there was a wide shoulder in a really intense section and we veered off and barely cleared this one truck at the last minute. We looked at each other and decided this was about as close to dying as we have come in quite a while. These drivers were the worst we’ve encountered, with absolutely no concern for anyone elses life.

Ridiculous. We started the day just planning on a leisurely drive to the next beach. 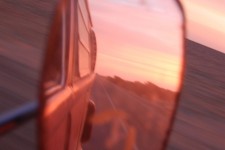 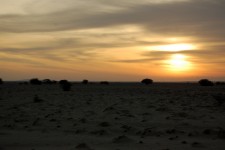 By the time we got to Chiclayo we were at the end of our rope with the other drivers.  We were on the road an entire day and were now driving around a strange town at night.

We tried heading for a hotel on the outskirts of town listed in our guidebook as having internet and parking. Our guidebook failed us again, as it had neither. So into town we went, were there seemed to be no traffic laws. A 2 lane street was packed 4 cars wide, and no one had a stop sign in any direction. Darkness only adds to the challenge.

Finally, we made it to a hotel with all the amenities, which we got to enjoy for exactly 10 hours before we were on the road again.

Also, we just heard from Alice Griffin – a UK travel writer who interviewed us a while back. She put a few blurbs about us in her article published the March/April 2011 edition of National Geographic Traveller. You can read it here (scroll way down to the bottom!)

6 thoughts on “desert trash and a pirate party”