The next day, we got up and had our now-typical breakfast of gallo pinto. Good stuff and quite addictive. We went and got Doug from Miss Miriam’s – all of these places have names like Miss Junio’s and Miss so-and-so’s… it’s charming, especially since you’re dealing directly with Miss Miriam. 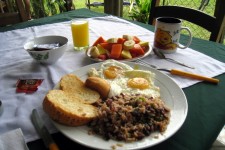 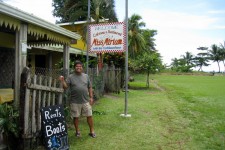 Anyway, we were leaving today, so we bought tickets for the 11:15 water taxi back to the mainland.

We had some time and while Doug and Bode hung out at the playground, Jason and I went walking the tiny town. Next to the playground, I stopped in a cute shop and was browsing the earrings. The next thing I know, Jason comes running in and say ‘we gotta go’. We quickly walk down to the dock, and as I pass the park I notice that Doug and Bode are not there. 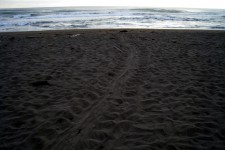 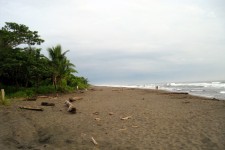 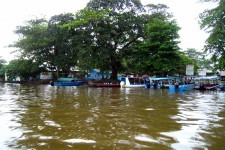 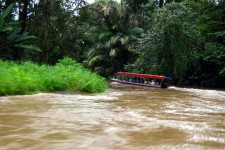 I mentioned that I was just about to buy these really cool fish scale earrings and Jason said he got me out of there just in time. As we get to the boat dock (it really isn’t a dock, just the muddy place the boats slide ashore onto) I see the water taxi leaving with Bode and Doug on it. We start running and waving our arms. Finally, the guy backs up and we climb aboard.

After sitting down, I glanced at my watch at it says 11:08. For the first time in Central America something has been on time… actually, early. Here, they leave when the boat is full enough, regardless of time. I think Doug was most relieved – we had the keys to the bus and I don’t think he wanted to entertain Bode until we arrived on the next boat at 3 pm. 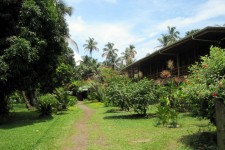 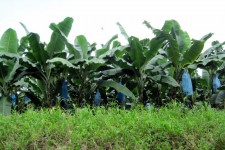 We were happy to find the bus exactly as we left it and we all prepared for a good drive.

I failed to mention yesterday that the drive to the dock  is a very long 29 kilometers down a dirt road after the town of Cariari, which wasn’t even on our map.  It’s all banana plantations and road signs are non-existent. Getting back was even more of a challenge, but we managed.

Red Beard was running poorly the entire dirt road, so once we got into a town we pulled over in a closed restaurant parking lot where Jason could tune her up. We made lunch in the bus and entertained Bode. We are constantly stopping for some repair or other and it never phases Bode. He’s such a great traveler. 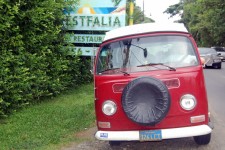 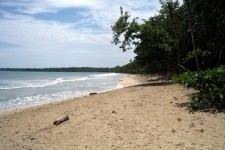 Down the road, we came across the town of Westfalia. It was on our way, so we thought we would be able to get some sort of photo with the bus. We were even thinking on staying here, but iIt turns out that the entire ‘town’ is just a few houses and one restaurant/hotel. We made a few passes back and forth looking for some equivalent of a city limits sign to no avail. We had to settle for a shot of the bus next to the restaurant. It’s near the beach, but Westfalia, Costa Rica isn’t as Volkswagen Westfalia-friendly as we had hoped. 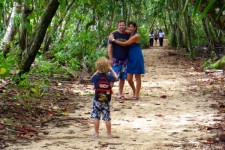 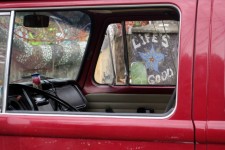 We eventually made out way a little further to Cahuita, where there is a National Park and called it a night.

* “We’re at the boat dock” is a trademarked expression that is funny to exactly four people.

3 thoughts on “We’re At The Boat Dock”