The day was one of those days when so much happens that you almost forget it has all been one day. The night before we had been stopped by  a torrential rainstorm, and had to find a motel room in the small crossroads town of Muelle.  The room was fine, but the empty restaurant where we’d paid and later grabbed dinner became a karaoke hot spot soon after we went to bed. We don’t know what they were singing, but it was terrible, and they kept it up until late in the night.

We woke up early and headed out to check out a local hot springs. We were pleasantly surprised by a beautiful jungle park alongside a river with 4 pools (2 hot).  It was so nice we considered spending the entire day and camping there, but another rainstorm rolled in and we decided we were better off driving toward the Caribbean. 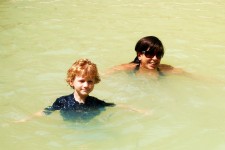 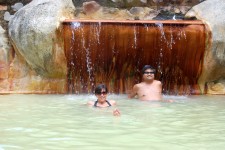 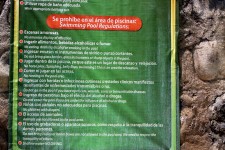 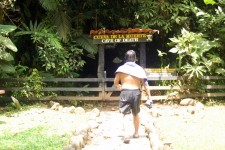 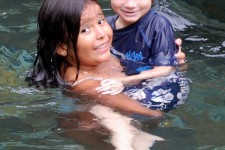 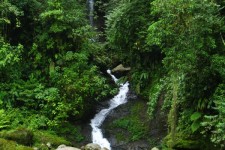 We drove a few hours to Cariari, where you take a labyrinth of dirt roads though banana fincas to find the boat dock at La Pavona. We showed up and found that the ferry was leaving in about an hour. We packed up our bags for a night without the van and parked Red Beard in the “secure” lot. The boat ride was about $3 USD each and the parking was $10 USD. 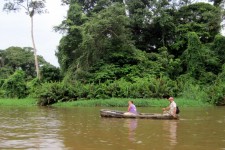 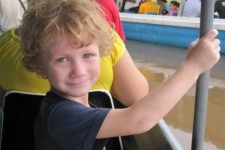 Tortuguero is only accessible by boat and about an hour’s ride from the dock. We have been wanting to visit a turtle nesting area for months. Timing, cost and the late nights have prevented it until we reached Tortuguero. 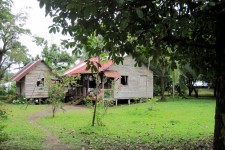 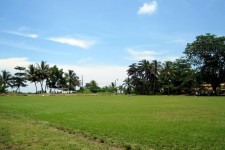 This was the first time we’d seen the Atlantic Ocean since we were on the U.S. Gulf Coast  in November.

The town has a Caribbean vibe and feels much different than not-to-distant Pacific coast. We are definitely in Creole country and most folks speak English as their first language.

The entire town consists of meandering dirt paths that connect the beach-side soccer pitch to the strip of tiendas and trinket sellers. We found a little hotel right next to the soccer field and  Bode ran out to watch the afternoon game and make some new friends.

We had some great Caribbean food that night – there was lot’s of simmering in coconut milk. Later, Bode schooled everyone in how to pick up cute European girls using only finger puppets. Pure genius. 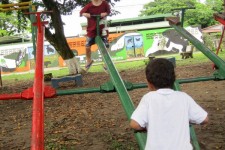 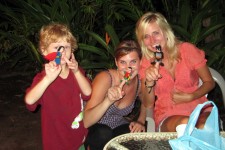 Naturally, we were staying up late to go see some turtles. A guide is required to be on the beach after 6 pm so we signed up with Emilio for $20 USD each (Bode was half that).  Half the money goes to the volunteer organization that helps spot the turtles for visitors and makes sure they are safe. After seeing the thoroughness and checks and balances of the park system rangers, guides, and volunteers  – we were convinced our money was well spent. They are very serious about protecting this habitat.

We were a little unsure if we’d see any turtles, but Emilio assured us there were ‘turtles all over the beach’. A boat picked us up and took us to a station at the end of the beach. Only 8 people are allowed with each guide and each guide is assigned a certain area of the beach. Rangers and volunteers patrol the entire beach to ensure everyone is following the rules.

Our paperwork was checked and we were led out to the beach.  Immediately, the guide walked us to an enormous green sea turtle. She had dug a massive hole and was laying white ping-pong ball size eggs. Apparently they lay over 100 eggs at a time and return 7 more times each season to do it again.  After she finished and was beginning to cover the eggs, she flung sand all over us with her flippers. Everyone was just in awe. These giant creatures can really move some sand.

We walked down the beach where Emilio had found a turtle that was heading back out to sea. We slowly followed behind her to the ocean and watched until we could no longer see her. As we stood there, turtles emerged in the surf on both sides of us, just starting their 2 hour nesting ritual.

We walked the beach and found more turtles laying eggs and then returned to our first turtle to watch her go out to the sea.

Through all this, Bode was pretty amazing. It was late, but he was excited. He asked great questions and was really engrossed in the experience. Regardless of age, you know when you are witnessing a miracle of nature.

Yet another really amazing day.

Unfortunately for us, photography of any kind was not allowed (and closely monitored), as even the camera’s light-sensor might disturb the turtles and send them back out to sea. Since we came away without any turtle photos, we decided we would all create something to remind us what we saw. 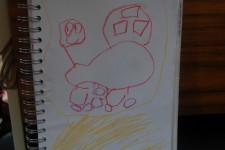 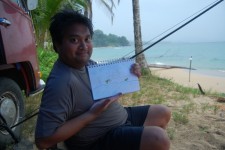 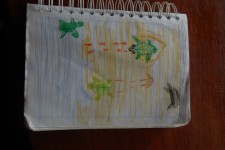 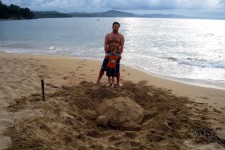 While Jason’s may be the most accurate (former sand castle contest champ is on his list of random useless accomplishments,) I do have to mention Bode and I did ours while riding in a VW bus on a dirt road.