We stopped by San Jorge to check out the ferry schedule to Ometepe and as luck would have it there was a ferry leaving in 20 minutes. Another boat ride! 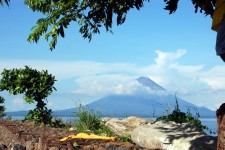 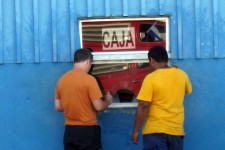 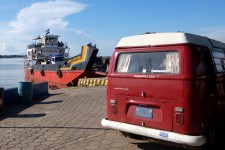 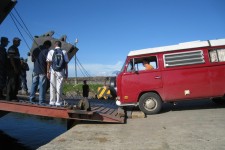 This one was pretty easy. For about $20 USD, we could ship the bus and all four of us over to the island. Since we were still a little paranoid after the break-in, we found a perch right above the bus and took a seat where we could see it.

Every single person on the ferry went by the bus and took a gander. Some folks pressed their noses against the glass, some folks used the mirrors to check their hair, some were just drawnd to lean against it. I’m pretty sure that every single person on the ferry put their hands on the car at some point. I never knew how much attention it got when we weren’t around and this was a bit of an eye-opener. 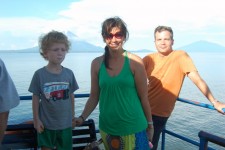 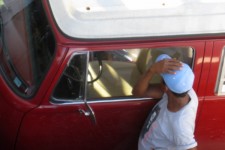 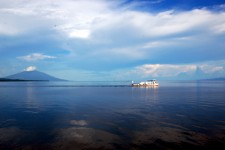 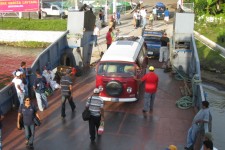 Ometepe is an island in the middle of Lake Nicaragua formed by two volcanoes. We hadn’t planned on ferrying over that day so we were a little out of sorts when we arrived. We found a place next to the water with a good view of the biggest volcano.

We swam in the warm lake and then whipped up some dinner. Doug was introduced to the wonders of Cavender’s Greek seasoning and we enjoyed a peaceful evening next to some mooing cows. 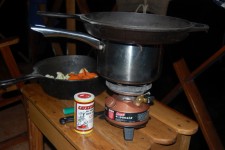 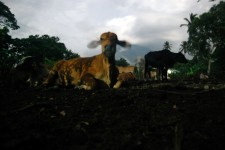 I spent some time with my new friend that I named Elsie (pictured) and tried some long exposures using my thoroughly emptied wine glass as a tripod. All in a day’s work.