When did you get your van? Any stories about the previous owner(s) or how you obtained it?

I found my current van (1978 GMC Vandura) on Craigslist in June of 2007.  I purchased it from the original owner who had “customized” it nearly to death throughout the ’80s.  It seemed like it was in decent shape until I got it home and really started looking deep.  The wiring was a rat’s nest and he had done some horrible body work that was hiding under a ton of bondo.  Still, everybody seemed to like the thick blue shag carpet on the ceiling.  It’s still an ongoing project but it’s getting close to where I want it.

It’s got a name, right? Any story behind it?

This one (1978 Vandura) is the Casual Turtle 5.  All of my vans starting with my first VW Bus have been named Casual Turtle.  The name comes from a line in John Steinbeck’s book “Travels with Charley” where describes traveling in his truck camper.  “I had to be self-contained, a kind of casual turtle carrying his house on his back.”

Have a favorite memory or trip in the van?

I have had many different buses and vans and they all hold great memories.  Each one represents stages in my life.  My carefree wanderings as a young, single man in my 72 Westy, Taking my (then) girlfreind on trips in my 85 Econoline and so on.  I think this van is all about the future.  With my son almost a year old all I can think of this van is the memories and trips that we will make together as a family with it.

There are 3 big ones in the works.  1. Driving Rt 66 all the way west and then following the Lincoln Highway all the way back east to Pa.  2. Driving from Pennsylvania to Alaska and back. 3. Driving all the way south through Mexico to Guatemala (Thanks to you guys for the inspiration).

How did you hear about us? Any suggestions on where we should we go?

Facebook suggested Jason as a friend.  We had no mutual friends but I recognized the louvered window of a Westfalia behind him in his profile picture.  I found out about bodeswell.org and have been checking it daily ever since.  No suggestions since you are headed where I have never been, but I will extend a permanent invitation to visit/camp/crash with us anytime you may find yourself in Western Pennsylvania.

P.S.  I am starting a van travel blog to document my vanning adventures with my wife, son and 2 Boston Terriers.  Its still in its beginning stages and kind of random, but here it is if anyone wants to check it out. http://www.avannersnexthorizon.blogspot.com/ 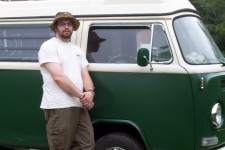 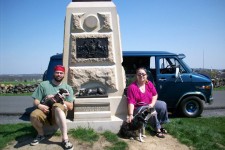 Want to be featured here? Just let us know through the comments or Facebook.

We’ll change the questions each month, just to keep you on your toes;)