We left our apartment in Guanajuato and headed out to stock up on supplies. It’s been a while since we had been camping and we needed the basics. We always seem to be buying a huge amount of liquids and only a little bit of food.

Then, we looked at each other and said “Now where?”

We had plans to meet up with Ane, Andres and Luca the next day, but we had a good 24 hours to make the hour-and-half drive. So, we took the long way to go get some ice cream. 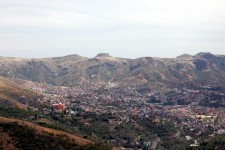 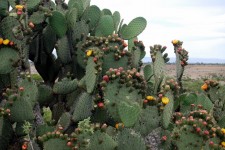 Aside from the historical stuff, Delores Hidalgo is also famous for odd flavors of ice cream. We were pretty excited to taste things like avocado and “creamed whiskey” ice cream. We had grand visions of getting a double-cone of cerveza and pork skin.

There were ice cream vendors all around the square and it was hot. We started with our favorites. Bode settled for his standard lime, Jason got his standard cappuccino and I got Tequila.  We all agreed that tequila was the best. It tasted more like a margarita, like lime with sugar. 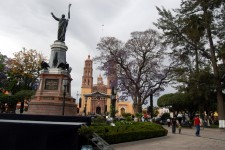 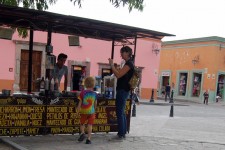 Some vendors were particularly eager to give you a taste. So, like good tourists we bellied up for a taste of molé chiccarrone (pork skin with molé…ew), elote (very good, taste’s like cream corn), and pine nut with lard (at least that’s what our phrasebook told us.) I opted for a scoop of the untried cerveza this time, going for a theme – it was horrible. I tried to pawn it off on Bode or Jason but it ended up in the trash. Bode went for fresca.

We tried just about everything – some of which we still aren’t really sure what it was. 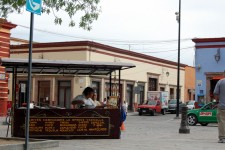 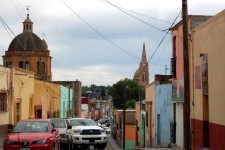 6 thoughts on “We All Scream for Ice Cream”