It’s official – we’ve moved back into the bus and are on our way again. Here are a few random thoughts until we figure out where we’re going:

Our Spanish teacher told us about her husband’s love of cockfighting. He raises his own cocks and everything. It’s illegal, but apparently not uncommon.

The family atmosphere is something we really love about Mexico. The babies don’t cry, the bigger kids take care of the littler kids, and the teenagers walk arm in arm with their grandparents down the street in the evenings. It’s supposed to be this way.

When we’ve been to the local park, a group of kids of all ages welcomes Bode and starts playing with him regardless of the language barrier. It’s not something unique to this town, but a general attitude of inclusion among the kids in Mexico.  At the end of an hour playing with this particular group, they had given Bode a plastic helicopter toy and a ball. He was thrilled.

Countless restaurants have turned on cartoons or put in movies for Bode when we arrive (during sushi he saw the first half of Avatar…they even changed the settings from Spanish to English for him). Everyone is open-hearted to the kids. It’s supposed to be this way. 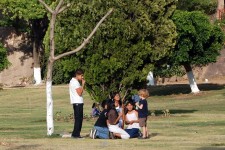 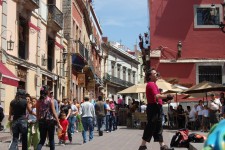 On weekends (and all through Semanto Santa) mimes and clowns performed for tips to a huge crowd that sat outside in the heat on the steps of the historic Teatro Juarez. Bode was delighted with these performances, as were hundreds of Mexicans.

I think of all the times we brushed pass the ‘silver guy’ or Bush Man in San Francisco scoffing at the handful of tourists watching the shtick. But here, it’s so different. Pure joy. And it isn’t just those in the crowd. If the mime tries to make fun of someone passing by, he gets into the act. I’ve seen bald men chase him in jest for a hair joke, ice cream vendors toot the horns on their carts just as the mime bends over, and women pretend to be in love with him. It’s just amazing–daily life- it’s theater–and all part of the show. 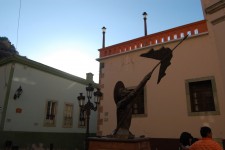 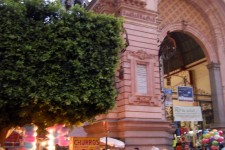 The apartment worked out to about 15$ USD per day. Camping on the hillside was $12.

Our apartment was a steal – but we found out why. We had to deal with the occasional poo smell wafting through. After much discussion, some finger-pointing and further investigation we figured out that the shower drain was probably installed with no trap – connected directly to the sewer. We made a make-shift drain plug and kept the door closed and that seemed to take care of it.

The next order of business was the poop paper basket. If you’re flushing your paper, you’re just not in Mexico. This hasn’t been (too much) of an issue so far, but now we had our own apartment and were in charge of emptying out the trash ourselves. You have to really love somebody…

Our tiny studio apartment was right above the street vendors – we literally had to push our way out the door between ladies cutting up cactus, bakers selling bread on boxes, the plastic-ware lady, the veggie guys, etc. If we were ever hungry or needed anything, it was just right outside our door.

We ate from just about every cart, but settled in with one of the gordita ladies as our favorite. We could barely walk by one lady cooking up cabeza in a huge pan. She was fortunately positioned towards the end of the block and could be avoided. Our friend Ane is pregnant and we had a quick discussion about how her sense of smell is heightened… Mexico could be a tough place to be pregnant if only for that reason.

There is a complete absence of cooking utensils at all the food carts. Doesn’t seem to matter. Need to flip the tortillas, carne, or whatever? Just grab it and flip it. Go ahead and touch the scalding cooktop – doesn’t hurt a bit. Need to move those coals around underneath?  Just reach in and poke them around with your hand.

On the way up to our door we would walk right by the open window of our neighbors kitchen, where we could look right down into her pots to see what was she was cooking for dinner. It’s an intimate town. 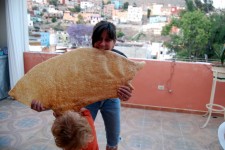 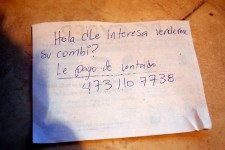 On our last night in town, we went for a walk to the big Jardin and had dinner and soaked it all in. There were dueling mariachis every few steps and lively activity everywhere. The edificios and gardens are even more beautiful at night. This is just a great place. We usually tire of places quickly, but even after 3 weeks we don’t feel like we’re finished with Guanajuato. We’ll be back some day.

And, no, we’re not interested in selling the bus.