We continued to back-track and headed north to Rincon de Guayabitos. Aside from hearing good things about the town, we’d been told my multiple people that we had to go to the big VW show.

Guayabitos is a pretty cool place and not your normal gringo vacation destination. It’s a normal Mexican vacation destination. That’s what makes it so cool. It’s built up for tourism, but mostly for weekenders from Guadalajara and other inland cities. Each weekend they come from all over Mexico and take the place over. During the week, you’ve got it to yourself. 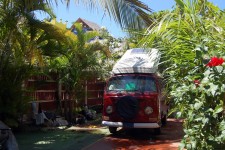 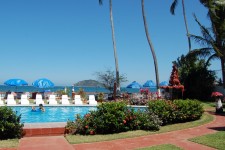 We found a beach-side hotel that let us camp in their parking lot and use their facilities. This place was oozing with old-school charm and long-faded grandeur. We were camped just a few steps from a tranquil pool and a few more steps to a completely packed beach. Starting on Friday afternoon and throughout the weekend, the beach was absolutely filled to capacity and everyone was having a good time. 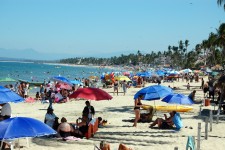 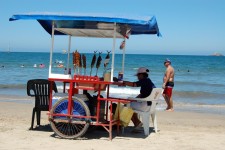 There were still tons of vendors on the beach, but this time they were selling practical necessities instead of the PV tourist junk. Coco frio? Si si. Fish on a stick? Bueno. Giant blow-up floaty things? Bode wanted one, but maybe next time. 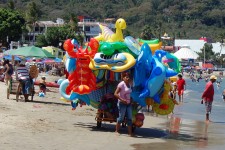 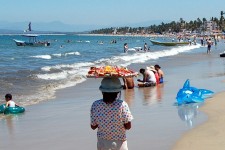 By the time Saturday afternoon rolled around, we were done with the beach and went a few blocks into town to check out the festivities. We heard the show started at 5 pm. At 5, we heard that 5 really meant 8 and that it was just a big cruise and street party.

By early evening, most every block had vintage VW’s parked up and down it and people were all over the streets. There was a wedding that afternoon and I had to wonder if the bride was aware of her timing. No word on whether or not she left in a VW limo, but I doubt it. It was a big production with a huge reception on the beach that night with multiple bands, a Jumbotron(?) and fireworks. If you’re interested, the bridesmaids wore orange and red. 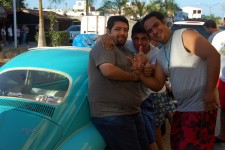 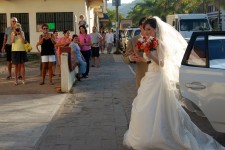 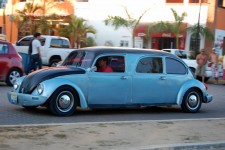 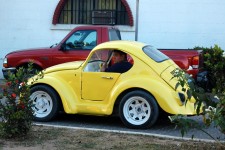 We wandered the streets and talked to all sorts of nice folks and found out that the actual show started at 9 am Sunday morning. We figured that really meant 11.

The streets kept getting packed and the cruise started. I don’t know if it’s a regular Saturday night thing or not, but all sorts of other custom cars showed up too. Low-riders with hydraulics and neon and such. Most people seemed to stick to the sidewalks and cheered when a VW drove by and jeered when any non-VW drove by. It was pretty funny and all good-spirited. 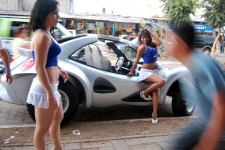 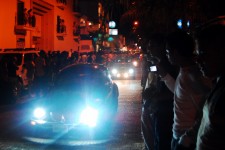 Later, the burn outs and testosterone-stroking started and we took it as our cue to leave. It was about 9 pm that night, and we could tell things might start to get out of hand. Safety wasn’t really an issue so much as just not wanting to be around so many people that had been drinking in the sun all day. There are only so many things we’re ready to explain to a four year old. 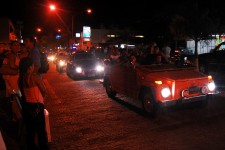 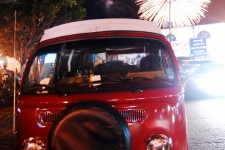 We learned all sorts of other stuff that night.

If you drive a dune buggy or any sort of vehicle with large tires, you absolutely MUST park with one tire over the curb. This is essential to promote your coolness.

Those bikini girls you see in car magazines draped all over the cars? They seem to be walking around for hire. They have a handler and everything. We have no idea what it costs, but Angela was the first to suggest we should hire them for some photos with Red Beard. We didn’t.

You can comfortably fit 7 guys in a VW Thing (Safari.)

You think a VW bug is small? You can make it WAY smaller.