Because locating our package and hitting the Mega took most of the day, we headed just out of PV and back into Sayulita for the night. We found a campsite next to the beach and parked near 3 other VW buses. Two had been there for 4 months, one of them just a week.

Everyone was a surfer and everyone had little kids. Surfing 2 or 3 sets a day and raising the fam in a beach-side campground. Quite a life. Of course, these folks were from… Canada. They were all just a few weeks from heading back and resuming their normal lives. They will all be back next winter. 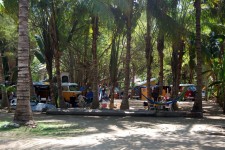 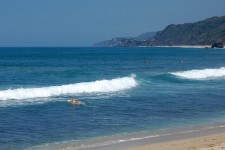 The sites were just back from the beach in the jungle. Every night you could hear the strangest noises coming from the place – mostly birds but I’m not sure what else. You could also hear the chorus of dogs. Then, there was the insomniac rooster that started up at 4am.

Jason installed the solar panel and Red Beard has gone green. He had no drill or electricity, but was able to put mounting holes in the pop-top with a screwdriver and lots of patience. He went to the local hardware store for some bolts and washers and they had four of them – total. And they were rusty. We bought them. By afternoon, it was mounted on the bus and he took extra pleasure in using the solar panel to charge the battery to run the soldering iron to wire it up.

Problem was, by the time he completely finished installing it, it was late afternoon and the 2nd battery died soon after. No cold fridge tonight either.

On three occasions, someone walked by and commented on the color of our bus. “Duuuude, that’s soooo red! That color is amaaaazing, I’ve never seen anything sooooo red!” I don’t think we’ve had anyone specifically comment on the extreme redness of our bus, but it’s consummate colorfulness got three people’s attention today. They have the good stuff here in Sayulita. 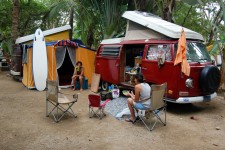 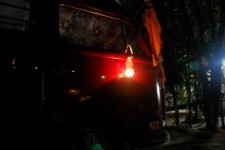 We pretty much stuck to the beach and campsite this time. We took Bode out boogie boarding, which he loves.  He squealed and laughed the whole way. He’d yell “My wave! My wave!” before riding in and yelling “Cowabunga!” After a good tumble, he’d pop up and yell “Wipe Out!” and flash a hang-loose sign.

The waves were breaking in waist-deep water (ours), so Jason would get him on a wave and I’d have to catch him. Usually no problem, but several times he was a little far from me and I’d just jump on the board with him to slow it down.

I think we have a surfer in the making, if only he’d get that swimming thing down pat. By the way, if anyone has any suggestions on teaching a kid to swim, let me know. He kicks, he flails arms, he sinks. He doesn’t seem to mind, he loves the water…he’s just not getting the concept of staying on top of it. 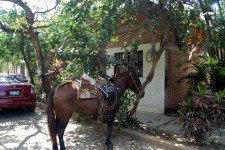 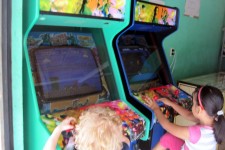 We headed out the next day and visited the very quiet town of San Francisco, just north of Sayulita. Horses parked on the streets, very few tourists and a beautiful beach. We might come back here some day, but we had to get moving on to Guayabitos to meet some folks and go see some vochos.