After several days of getting our bus ready to roll again, I finally had some time to sit back and relax and take a look around. We were getting restless after being in this spot for only a few days, but we were surrounded by people who had no intention of going anywhere anytime soon. The thing that struck me funny was the vehicles they were driving. Most of them are just retirement homes on wheels, but the names of these things suggest something completely different. Most of them suggest some sort of adventurous activity, but in reality most everyone was just sitting parked. 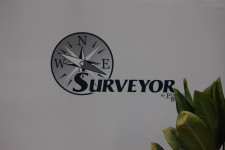 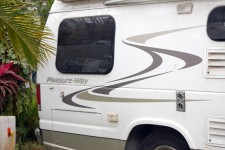 A few of them, like The Surveyor made sense.  Just looking around. The Pursuit is a logical one too – a follower – but not really something worth labeling. The Scottsdale, The Journey, The Chateau.  All boring and logical. Yawn.

Others could be downright tawdry. The Pleasure Way? The Cougar? Watch out for these folks.

Then there was The Bounder. This guy spent the afternoon bounding around trying to set up his satellite dish. The Sprinter? Please.

Why can’t these things have more honest names like The Sit and Read? The Sedentary. How about The Park and Rest?

One more thing I noticed was that coconuts are seeds. I have a pretty keen interest in plants (Life’s a garden – dig it) but I had never considered that a tree might sprout from a coconut. 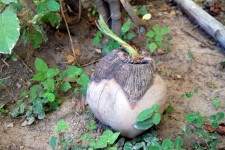 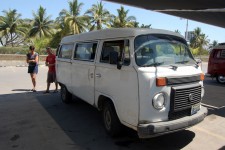 Anyway, we’re done and moving on.

On our way out of town, we stopped at a big store to pick up some supplies. A few minutes later, Jamison pulls up beside us to check out Red Beard. He’s driving a ’93 water cooled Mexican VW combi. Looks like a bus and acts like a bus, but it has a radiator in front. I have no idea what’s in the rear and I don’t want to know.

He bought the thing here in PV for $500 USD and had to tow it out of a swamp. He spent another $1000 USD getting it running and then spent the last 6 months driving to Costa Rica and back.

He’s a kite-surfing instructor and spent some time teaching along the way, but like so many others, ran out of cash and is heading home. He came back to PV to teach here,where he had some connections, but got death threats and a rock through his windshield from a loco competitor. The local police and the US authorities told him he wasn’t safe here and they couldn’t do much about it. His girlfriend already headed back to Wisconsin, so it was an easy choice.

An interesting part of his story was that he got in an accident in Nicaragua. Accidents down here are big deals. Anyway, it wasn’t his fault and he wanted to file a claim with the other driver’s insurance. Part of the deal is that the police have to hold the vehicle until the claim is paid. It took a month, and they slept in the bus at the police station the entire time. Both he and the police were amazed when they actually got a few hundred bucks after a month of waiting for their claim, and best of all he had a free and safe place to stay right next to a big lake in Nicaragua the whole time.

It’s for sale here in PV and I can connect you if you want to pick up where he left off. 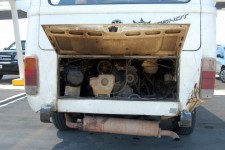 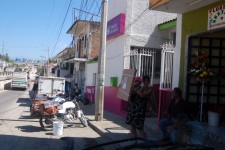 The best part of our day was successfully getting our package. Finally.

We made calls. Lot’s of calls, with no luck. Finally, we were persistent enough to get someone else to make the calls for us… and it worked. Where was it? Sitting in post office in a town 20 miles away. Just sitting there the whole time. No notice or anything. I’m not sure how the system works here, but it did kind of work – just not like we expected.

I saw that everyone coming and going from this post office was on a motorcycle with saddlebags. Our package was just too big for anyone to take on their bike… and apparently they don’t notify you either. I guess you’re just supposed to go looking for it.

The package? We pre-spent our now-missing Google Ad money on a solar panel. Once we got down south of La Paz, we just couldn’t keep the fridge running long enough for it to be useful. Solar panels are oddly expensive here, so we bought one online and had it shipped.