Our week in paradise flew by and it’s back to reality. We packed up and planned on taking Julie to the airport after lunch. The problem was that the bus started acting funny a few minutes after we left the condo. Sputtering and gasping and generally sounding like a sick puppy. The farther we drove, the worse it got. 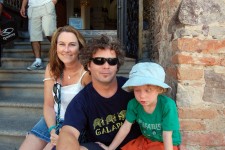 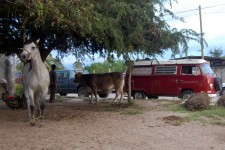 Just one day prior I decided to tune it up and get all new ignition components – coil, wires, distributor cap and rotor, plugs. It hadn’t been running 100% the past few days and I suspected the coil might be going south. It ran noticeably better after I replaced it. I was sort of proud of myself driving back to the condo that afternoon and it was running GREAT. Well, that lasted just the one day.

By the time we rolled in somewhere for lunch, I had to tell Julie that it was the end of the road. This thing was not moving until I went through everything. Since this was exactly how we parted ways with Julie the last time, she didn’t seem too surprised. Her friends are driving a crappy old VW bus.

After lunch, we waved goodbye as she sped away in a taxi and I set about going through the bus in the parking lot.

I started with the valves and went through the entire tune-up routine. After way too long, I figured out what I should have tested in the first place – the brand new one-day old coil was toast. After taking it out, for some reason I shook it and holy crap! It was full of liquid! It sounded like a water bottle! What the?! Thank goodness I saved my old one. I put it back in and we were off – still not 100% – but off to find a place to camp for the night.

I had found a VW-only shop and bought what they were selling, thinking I was just getting what was available. I found out two things. One is that they’ve never heard of a 009 distributor. The other is that they use some sort of wacko liquid-filled coil that is complete junk. Like an idiot, I went back and bought another one. It lasted 20 minutes.

Thinking I was somehow doing something wrong, I realized that the rotor I had installed was different than the rotor I had before – no ~5k resistor in this one. Was this killing the coil? I put my original rotor back in and returned to the shop for yet another coil – this time exchanging for a freebie. Guess how long it lasted? Ten minutes. How is this possible? 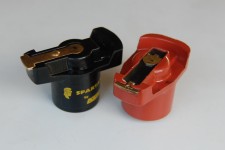 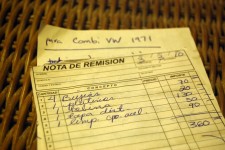 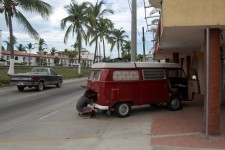 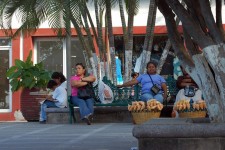 First, I decided I was done with this shop. I was sure they were selling me junk and I knew I should be able to do better. VW parts in Mexico? This should be easy! I was told I could find fuel pumps in the grocery stores (not true.)

I started asking around and everyone just pointed me to the nearest auto parts tienda on their corner. Every place had a coil for a VW – the same liquid-filled junk, but sometimes with a different name on it. I asked about the quality and a few shops admitted that it wasn’t a very good coil. Somehow people run these things? I insisted on a Bosch blue coil and no one could help. No one even knew where to find Bosch parts in Puerto Vallarta. Although the old air-cooled VW’s aren’t as ubiquitous as they once were down here, I’m completely confused. How are the Mexican vochos running with these parts?

Like any dork, I turn to the internet. We decided to stay put for a few days until we get everything sorted out. I search for some local VW clubs and find the Puerto Vallarta and Guadalajara VW club web sites and forums and start sending emails. The next day I get an email from Francisco and he tells me I need to go find Alberto at Volks Vallarta. Just like in the US, you need a good air-cooled only shop to get good quality parts. Alberto had a blue coil and some other miscellanous parts on our list. Even better, he’s a really nice guy. He also confirmed that the 009 distributor doesn’t exist anywhere in Mexico and that the liquid-filled coil is “basura.” He insisted we stick around for a big VW show in Guiyibitos the following week, so we’re going to see if we can stay in the area. The bus isn’t currently moving, so it’s not a tough choice.

If you’re looking for quality VW parts in Puerto Vallarta, Alberto is a savior. A little information goes a long way. Find him at Volks Vallarta – Francisco Villa #389 (phone number 222-5417.)

I got all the new parts on, fixed my door handle, and even replaced my front brake pads. The front left brake was squealing and it turned out the old pad had lots of little holes in it (uneven and porous.) The right one was fine. More sub-par parts? I replaced both and everything is fine again… except I’m still not quite happy with the way the bus is running. The next task – tune it up again and look for a possible vacuum leak.

7 thoughts on “Not Quite Done Yet”