Our next day-trip was to Quimizto. Julie’s brother’s best friend’s girlfriend’s brother lived there. The problem was that we didn’t actually know his name or contact info. We decided to just go and ask around – how hard could it be?

We made it about 1 km out of the condo and – this has never happened before – something actually fell off the bus. The right rear shock. The third shock absorber to fail (hello… is there a shock sponsorship out there?) I’ve seen the bumper stickers that said ‘honk if something falls off’ on plenty of buses and always thought it was funny. I never thought it would be necessary.

If anyone recalls, we had some some major vehicle problems the last time Julie tagged along, so we figured something had to happen this time to keep our streak alive. Not too bad. 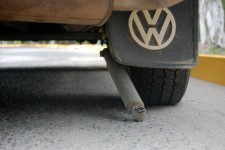 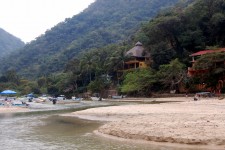 You can’t actually drive to Quimizto – you have to take a boat, so we went looking for the boat launch in Mismaloya. The thing is, there isn’t one. You can hire a boat off the beach for the day, but we just wanted a ride a few towns down the coast.

Incidentally, our guidebook said Mismaloya was a ‘don’t miss’ place to visit. We suggest otherwise.

We drove another 10 minutes south and we found Boca de Tomaltan, where we could catch a water taxi. I was on my second Pepto of the day and our family loves to put people with weak stomachs on a boat. I’d like to blame it on food, but I think it had more to do with the tequila the night before. 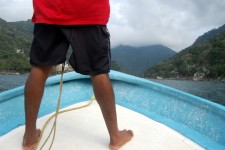 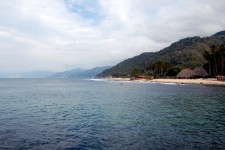 The boat ride was faster and bumpier than I would have liked and once we got there, there were 2 things to do: eat or ride a horse to a waterfall. Any other day the second option would sound great, but I wasn’t up to it. The others didn’t seem to interested either so we hit the restaurant on the beach.

There’s a guy holding an iguana for you to take a photo with when you get off the boat, but he apparently also works at the restaurant. He placed the iguana up on the rafters of the palapa just over Jason’s head. It was an interesting meal and we all expected something eventuful to happen with an iguana hovering over our heads, but nada. Later, the guy came and got the iguana and threw him in the ocean for a swim. They are good swimmers, but look pretty out of place in the water. “Like a swimming iguana” sounds like a great similie, but I’m not sure where I would use it. 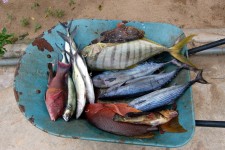 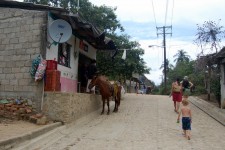 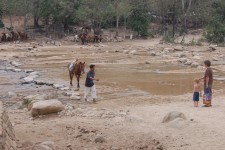 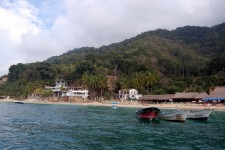 On our way out, we saw one salty looking American guy that seemed like he might live here. It’s a small town and he din’t quite fit in with the rest of the locals. Jason went up to ask him if he was Tatiana’s brother. He was not, but he did know Julie’s brother and best friend to Tatiana’s boyfriend. Enter Andy.

Apparently, there’s an actual underground network of stoner surfer beach bums – and they all know each other. Saying we knew Steve-O was enough to let us into the network. Andy is practically a clone of Steve-O.

Andy used to work with special-needs kids until, he says, the previous Bush administration made such sweeping cuts to special education programs that he found himself out of a job with no prospects. He couldn’t find any work, so he sold everything – bought an old ambulance – and drove to Mexico. He traveled around for a few years and went as far south as Panama. He has been beach bumming and living all over Mexico ever since.

I assumed all along that the ambulance was re-painted and converted into some sort of camper with no emergency lights or anything. Thinking about it now, I’m not so sure this was case.

Anyway, Andy was a nice enough guy and offered to put us up as long as we needed (normally we’d take it, but we had luxury digs this week) and share his connections and travel advice with us.  We hung out with him until our water taxi arrived and headed back to PV.

That night, Bode wanted to take advantage of our giant tub and insisted on a candle-lit bath. “It’s like a spa,” he says. “There’s nothing better than this!” I’m pretty sure Andy’s place didn’t have a spa tub.