Bode’s been clamoring about Crazy Horse since last year, so it was first on the list in South Dakota. It was quite a site, and the visitors’ center was a maze of interesting stuff.

The sculptor Korczak Ziolkowski, who also assisted on Mt. Rushmore, received a letter from Chief Standing Bear saying “My fellow chiefs and I would like the white man to know that the red man has great heroes, too.”  Only in his twenties, Korczak decided to dedicate his entire life to the project and began chiseling away at the mountain in 1948 with only a few hand tools. Today, his wife and most of his 10 children continue to work on it, but it’s unlikely to be completed in our lifetimes. Still, it’s the largest sculpture in the world.  You should see it. 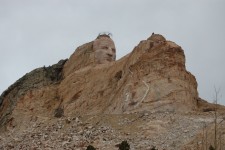 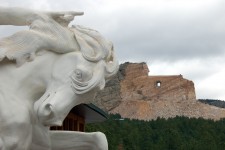 My land is where my people lie buried.

The 4 presidential heads on Mount Rushmore could fit inside the head of Crazy Horse. It’s not so much that mount Rushmore is small, but that Crazy Horse is so BIG.  From the highway, those four old guys are dwarfed by their parking garage and visitors’ center. And, $10 to park the bus in what is otherwise the middle of nowhere – the National Parks Pass is no good here. Still, it was cool to finally see it up close, and we got to see some mountain goats up close too. 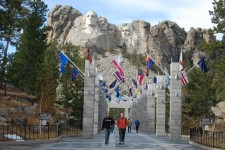 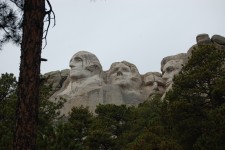 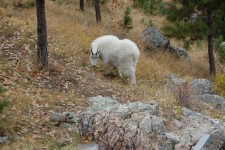 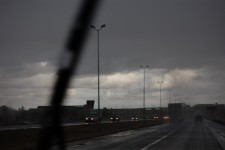 We had some nice offers to meet up with some folks in Rapid City and had made plans to eat at the Corn Exchange, but we were driven out by a storm that turned the sky entirely black. We had finished seeing the giant heads, and it was still late afternoon and we could see some blue sky to the east. Since nobody wanted to spend all afternoon and evening in the bus ins a major storm, we decided to take off and try to beat it.  It was raining sideways and I swear I could see tornado clouds in the distance. Tornado chasing in a VW bus today and we’ll be sending Bode up in a balloon tomorrow. After about 30 minutes we were ahead of the storm and there were clear skies in 3 directions. Plenty of time to stop in Wall.

We dug Wall Drug.  Well, actually none of us dug it.  Wall Drug exists solely due to the foresight of a massively successful multi-state billboard campaign. We saw the first signs for Wall Drug in Wyoming, about 300 miles away on some dinky side road.  Not even a major highway.  The billboards radiate out into different states from every direction and pop up alongside every paved surface. No matter where you’re going, it’s on the way. Resistance is futile. You will stop.

It didn’t look like what I expected. The best part was that it was free. 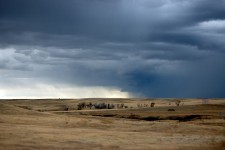 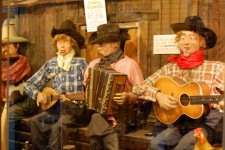 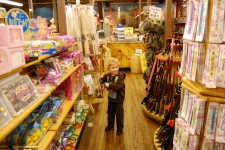 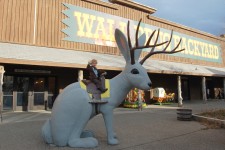 3 thoughts on “Have You Dug Crazy Rushmore?”