Next up was a long drive to Vermillion, SD. Never heard of it?  It’s the tenth largest city in South Dakota! Home of the National Music Museum! The “Berkeley of South Dakota!”

We’ve been through a few towns that call themselves the “Berkeley of so and so” and honestly, I think they should choose a higher standard. I can understand the gist of the comparison, but if you’ve spent much time in Berkeley recently (Bode was born there) – and when I say recently I mean the last few decades – you might want your town to strive for something else.

Up until the past few days, we’ve spent very little time on interstates – intentionally –  but there just isn’t much you can do at this point along the route. This particular day, we were glad to be on it because we got to help out another stranded motorist. We had already had our own car problems this day (a freezing side of the road tune-up and clogged fuel filter #2), so it was no biggie to stop and help someone else having a bummer of a day.

When you see a car with two kayaks on top with the emergency lights blinking in the middle of nowhere South Dakota, you know they aren’t were they’re supposed to be. We pulled over and met Tiffany. She was driving from Leavenworth, WA to Michigan – a pretty long and lonely haul – by herself. Anyway, she ran out of gas, despite trying to stop and fill up at the previous exit (gas stations close for the season around here too.) We carry a spare gallon and have already used it a few times, so it was no problem to dump it in and try to start it up. The problem was that 1 gallon was apparently not enough to get it going – a little surprising.

I think she was correctly a little apprehensive to hop into the old bus, but we did our best to not appear to be serial killers and she agreed to let us help her out. There weren’t many other options. Only 10 miles or so down the road was another exit with a gas station and we were able to return to the car, add another gallon or so, and get her on her way. Bonus – we later heard from her husband and he’s an IT guy at a ski resort – the second we’ve come across in the past week or so. You can have a technical job and ride 100 days a year. Why didn’t I know about this career option earlier? Double bonus – we now have an open invite to come snowboard near Leavenworth – a real Bavarian town we almost visited a few weeks ago for a big VW campout, but missed due to calendar mis-reading.

One more aside – when she hopped in we asked when she left.  Yesterday. This put things in perspective for us.  We left almost three months ago and she’s ahead of us.

Okay, so today’s drive was going to be 400 miles.  Our longest day yet. We broke it up with a stop at some sort of mini-church rest stop and the Corn Palace in Mitchell, SD. They grow lot’s of corn here too. This year’s theme for the palace was transportation. We circled the place looking for a corn VW bus, but no luck. The Segway was an interesting choice, though. 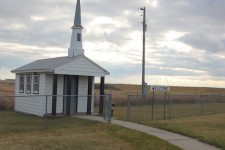 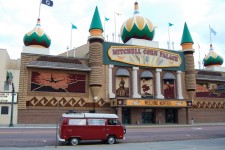 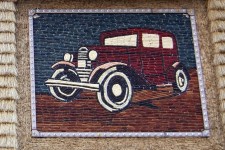 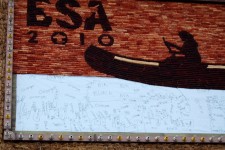 Finally, we arrived in Vermillion late. We rarely drive at night, but this was an exception. Eric, a good friend of mine from way back when, is a professor of political science here and we came for a visit. We lost touch many years ago, but thanks to the internet, it was pretty easy to find him and reconnect. It was fun catching up and sharing how our lives have evolved over the years. He’s lived all over the US, Central America, and even India. He and his wife became so good at moving that when it was time to go, they could just put their old stuff on the curb, get in the car and drive away. True minimalists. 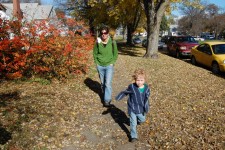 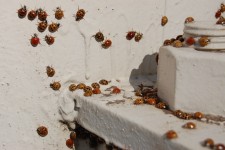 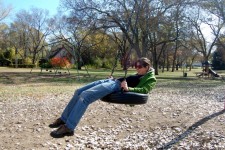 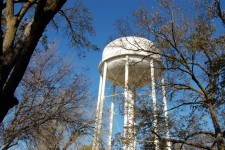 We got the scoop on small-town life in South Dakota. Every place has it’s advantages and this one is that it’s stuck in time – like it’s the 1950’s – in a good way. One of the drawbacks is the obvious remoteness.  Granted, we don’t go to shows as often as we used to, but there aren’t many bands that roll through Vermilion on their world tour.

Eric and I stayed up late one night and poked through each others music collections and tried to figure out where our music tastes have evolved. We’re both all over the place and had lots of overlap, but also converged in oddly unique places.  Not many people have both Darondo and Nigeria Special on their music player’s “recently played” list – but both of us did. He also got me hip to The Mountain Goats and some various selections that should help our street-cred with the Mexican hipster scene later in the trip. 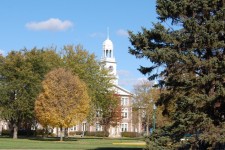 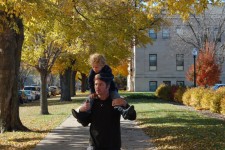 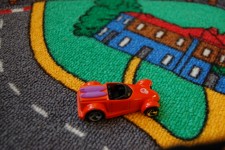 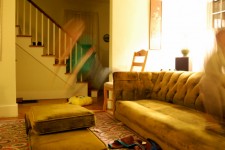 The National Music Museum was an interesting stop and has a surprisingly good collection of unique and historic instruments. I think we’ll have to defer on reviewing the local eateries, but the park and playground were really fun. Bode and Sver also had a blast running around the house and tearing the couch apart to jump on the cushions. Cannonball!

6 thoughts on “A Three in Vermillion Opportunity”