Mt. Saint Helens and Mt. Rainier were on the to-do list, so those were next.  This was also a chance to restore our confidence in the bus and new motor.

Saint Helens was a pretty impressive sight.  You kinda have to imagine what the mountain used to look like to really appreciate the amount of power and destruction behind the landslide and subsequent eruption.  I remember being glued to the TV watching the news footage as a kid.  The movie at the visitor’s center helps recall some of those memories and answer any lingering questions.  The ranger talk was intentionally goofy. Bode liked it, but it did not seem to hinder his unending questions about volcanoes.  Volcanoes are pretty cool.  We could have a future geologist on our hands, but he still claims fireman. 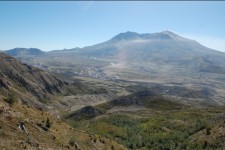 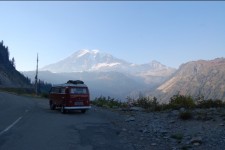 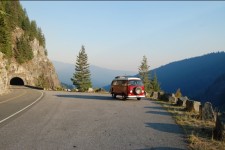 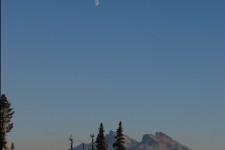 We had a blast at St. Helens (yuk, yuk) and Rainier was next.  We almost turned around because of a major fire on White’s Pass.  The smoke was thick and we weren’t really sure what we were driving into.  We got a recommendation on where to go to watch the blaze, but decided that wasn’t really on the itinerary.  Once we turned toward Rainier proper and climbed a bit in altitude, the smoke cleared up and we could focus on the 14,000 ft peak.  Again, we skipped on any major billy goat climbing adventures and just took some pictures and enjoyed the scenery from Paradise,WA.

4 thoughts on “The Mountain Test”