From Rainier, we headed closer to the coast. We heard good things about Gig Harbor, so decided to take a stab at it. Sorry for more bad puns.  Are there good puns?

It was a decent stop for lunch and a trip to the playground, but it otherwise wasn’t really happening.  We headed for Kopachuck State Park, which was only a few miles away, and made camp for the night.  It was getting wet fast, so we spent the evening in the bus playing games and listening to the raindrops plink on the roof.  Bode is starting to get pretty good at checkers – noticeably better each time we play.  While his finger is lingering on his piece, considering whether or not to finish his move, you can actually see the gears turning in his head. I don’t know what age kids start using money to make things more interesting, but he’s fortunately not there yet. 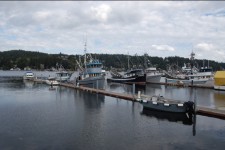 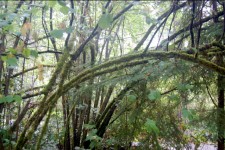 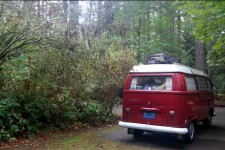 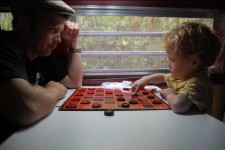 Later that night, we did manage to find a few leaks in the bus – one right above Angela’s head while she was sleeping.  Add waterproofing the rear luggage rack mounts to the list.  Again, it got pretty cold outside but we stayed warm and mostly dry in the Westy.

It cleared up a a little bit in the morning, but we heard there was going to be a major storm passing through with lighting and the works.  We took off around the southern tip and up the other side of the Hood Canal and Annas Bay to do some exploring on the Olympic Peninsula before things get really ugly. 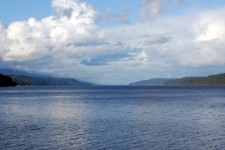 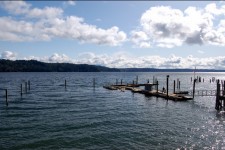 An unexpected highlight of the day was stopping at a coffee shop on the way.  They had a huge (like 3 ft x 3 ft) anatomy book in their book pile. 300 pages.  Awesome illustrations.  Bode and I browsed for almost an hour.  He had a million questions and I actually had to start reading the thing to get the correct answers.  I had  a pretty good high school anatomy class (thanks, Ms. Blaire!) but that was an obviously long time ago.

Anyway, this completely random event was the highlight of my day.  Without putting too much thought into it, I figure that this trip (and the bus particularly) is just one big Random Event Generator.  Despite the traveling, many of the things that have happened so far could have happened right at home – but they just wouldn’t.  Introduce a completely new environment with time to linger and your world and thought process changes quite a bit.

If you’re reading this you probably already appreciate the stimulus of traveling and being somewhere unfamiliar, even if it’s just a new coffee shop. The added bonus for me this time is sharing every day with my son and having the time to entertain his interests, pique his curiosity and teach him as much as I can.  Even if I have to read up on the spleen.

5 thoughts on “A Random Anatomy Lesson”