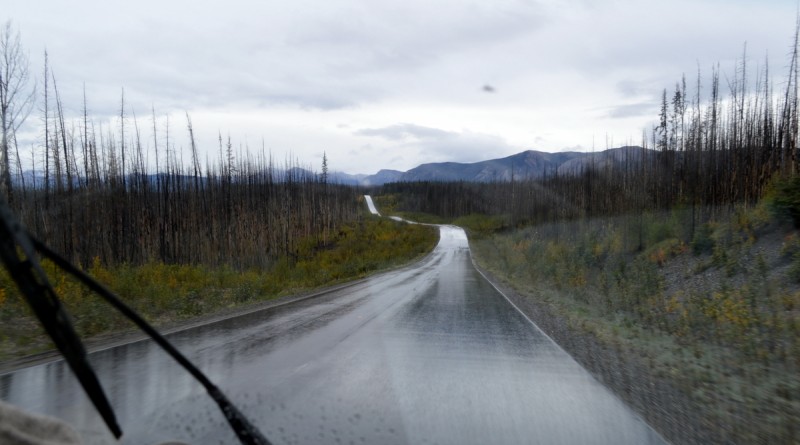 It was the beginning of September and we had just been covered in snow, so this was our cue to head south. Of course, we caught a show at Diamond Tooth Gertie’s before skipping town. 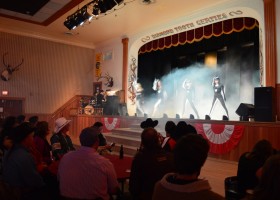 The only thing on our agenda for the rest of the Yukon was to just keep going. We made it from Dawson City to Whitehorse in one day – a pretty good haul for us. It rained the entire way.  We managed to warm up at a hot springs before stopping at the most popular campground in the entire Yukon: the Whitehorse Walmart parking lot. The next day Angela started thinking about polar bears. We drove above the Arctic Circle twice and we were never anywhere we could have seen one. Who planned this trip anyway?

She went into research mode and started working out logistics for a side trip to Manitoba in October.

While we mused on the possibilities, we kept kept rolling through the Yukon and into B.C. via the Cassier Highway. 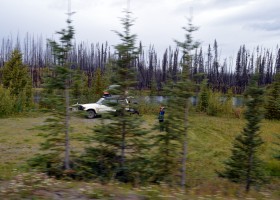 The Mali Mish guys and Caleb and Ariana were all booking south too. There’s only one road, so it’s not hard to catch up. Still, at some point we crossed into B.C and then back into The Yukon and back into B.C.  Still, we covered over 1000 km in two days.

We camped for a night at Boya Lake and stopped to camp in Meziadin Junction the next night. Here’s where we planned to cross back into Alaska. Some of this can be confusing if you aren’t looking at a map. 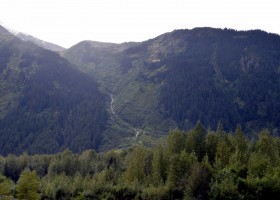 3 thoughts on “Dawson City to Whitehorse”