Our plan was to blast through the rest of Nevada and then relax for a few days at one of our favorite free camping spots in California – Utica Reservoir. Mid-week, we’d have the place to ourselves. Except, of course our secret wasn’t so well-kept and in the five years we’d been gone, the forest service had turned it into proper paid campsites; every stinking one of them full. 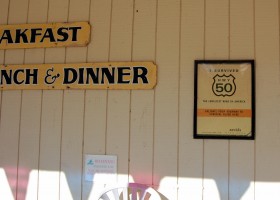 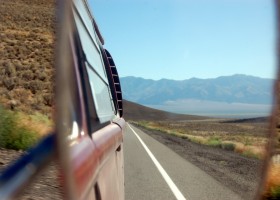 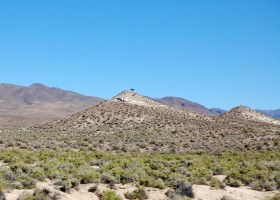 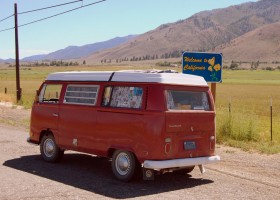 We took a quick dip anyway and headed a bit farther to another reservoir, which was also now paid camping. We lucked out and took the last spot available.

Even though it was packed with other campers, Union Reservoir has quite a few good hikes around. We packed up for a mile long hike and swim and started through the forest.  Jason had heard we could climb to the top of ‘Elephant Rock’ so we continued on about twice as far as we thought we’d be going. Two and half miles later, at the base of a slate-stacked mountain we met up with an extended family that was about to start the climb. They had done it many times before, and told us that it was pretty tough and that Bode shouldn’t go. Well, you can imagine how that went–Bode led the group. It was steep, and there were a lot of slipping rocks but it wasn’t until we were near the top that things got really interesting. So interesting that Jason told us to hold up while he scoped out an alternate route. He couldn’t find one, so we relied on the help of the other group to get us up and around a very tight turn requiring hand and foot placement instructions and some pretty good arm strength. 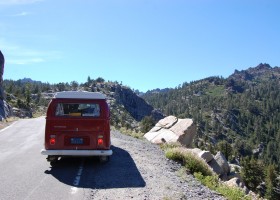 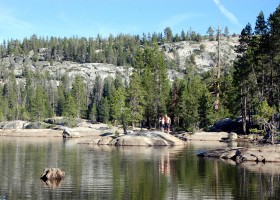 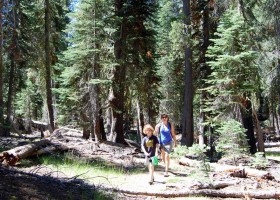 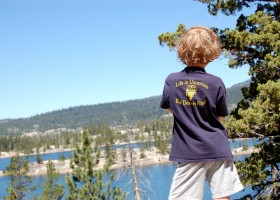 All the effort seemed worth it when we got to the top. Full 360 views of the area, lakes and the pine tree tops. At the top, there is a notebook to sign and a few random offerings.

Then the real fun began. For some reason, we went a different way down. I’m still wondering why we didn’t follow the arrow so carefully made out of rocks pointing the direction we had come. Jason helped Bode and I ended up farther back in the group with the backpack and water. The rocks were looser causing those behind to have to wait until the person in front had cleared the area, and everyone yelling ‘rock’ when one tumbled down the very steep terrain. Still, Bode managed to get hit by a big one that nearly missed his face. It knocked him in the clavicle and again under the chin. I heard him yell, but at that moment I was clinging on to the surface with my fingertips and toes while someone in this family tapped rocks below me that they deemed sturdy enough to climb down. This would have been really fun with some ropes.

In addition to being splayed out flat against the rocks, I am as usual not dressed for the occasion, sporting only a bathing suit and wrap around my waist. 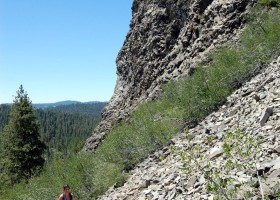 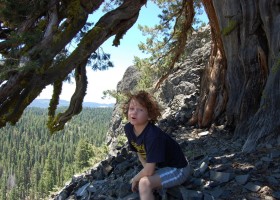 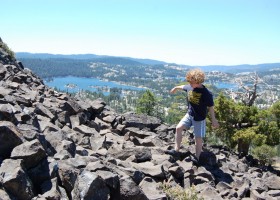 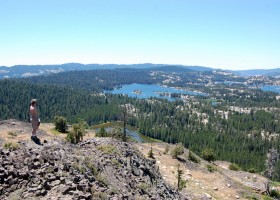 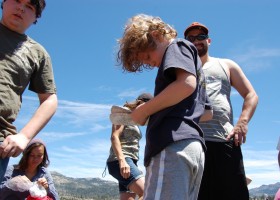 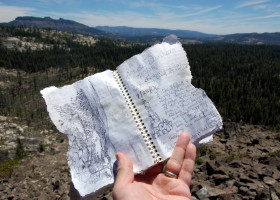 By the time we are all at the bottom, we were out of water. Luckily our new friends supplied us with a bottle which Bode promptly downs before our 2.5 mile hike back to the camp. We are all bruised, burnt, scraped and smelly but were feeling pretty proud of our accomplishment. We made it back to camp about 5 hours later than we expected. 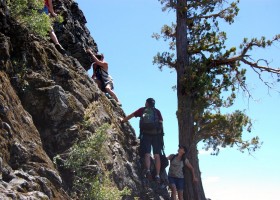 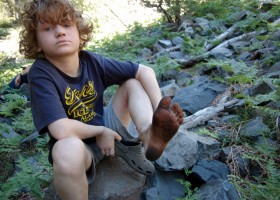 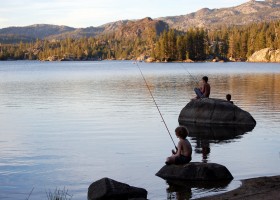 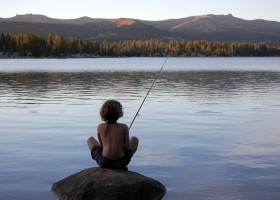 2 thoughts on “Return to California”