Warning: The upcoming week’s posts are an overly detailed account of our trip up the Amazon by cargo boat. It’s not always interesting, but neither is the voyage. It’s just meant to be an accurate representation of what it’s like to do it.

Our boat was scheduled to leave at noon, and the guidebooks say get to the boat 8 hours early to get a good hammock spot. So, when we awoke, we expected to see more hammocks and people milling about, but there were still only 3. A woman with an official looking shirt wanted to write our names and passports down on a list, but still there are only 5 of us on it.

As the tomatoes continued to load, I started thinking that maybe this is a cargo ship only, and perhaps there won’t be a crowd of people like I expected. Bode wanted some acai, and I wanted to get a few things. Our refrigerator was already dead because of the lack of sun, and a mercado wasn’t far away. And with the heat and rain, there’s only so much the solar panel can do. The woman said we could be back by 1, the boat was now leaving at 3. Ugh. 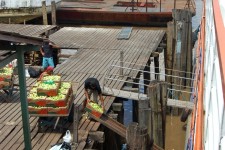 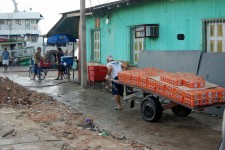 We hiked out to the port, but there wasn’t any sort of store around. We found signs for acai and actually bought some, even though it seemed melted – it was really hot and Bode wanted it anyway. Well, that turned out to be straight – not frozen with sugar. They serve it with fish here in the Amazon, sans sugar, which does not please Bode at all.

Next up, I tried to find ice. No luck. The only thing people seemed to be selling was beer – so I bought a few cold ones and we came back to the boat by 10:00 am.

The day got hotter and we watched 3 more semis loaded with green tomatoes get loaded, slowly. One crate at a time onto a cart, then onto the wooden plank. This was exactly how they provisioned the boats for Colombus, and they still do it the same way here in Belem.

The boat did start filling up, and I tried to take a photo, but they were all fuzzy.  I handed the camera to Jason, who was standing on the deck and he removed the lens to see what the problem was. Next thing I see is a 1 handed juggling act that only managed 3 near catches before the lens to our good Nikon D40 camera plopped right into the Amazon.

We’ve already heard that the best place to buy a new one is Amazon.com. Oh, the irony.

It was so hot we started to get worried about having cold drinks so Jason went out searching for ice and after a long time, returned with empty-handed as well. The boat had a lanchette, so we knew we could buy some there, but we had stopped by a store and loaded up with drinks before we got on the boat. Oh well, there was a log layover in Santarem where we figured we’d try again.

When they finally finished loading tomatoes, and a small truckload of vodka, it was nearly 5 pm. We’ve now been on the boat (or near it) for over 24 hours and haven’t gone anywhere yet. Finally, the air conditioner came on, the boat started rumbling and we maneuvered out of Belem.

The rain started and the tarps came down on the boat. There entire bottom of the boat, as well as part of the open deck where the cars were, was a giant wall of tomatoes. There was a guard on either side, if you call guys in a swimsuit and flip flops swinging in hammocks security.

I thought that food was included on this trip. I had read it somewhere. We had bought dinner for last night, plenty of snacks, and some easy to make things for Bode, since he has food allergies. No dinner included, but fortunately, dinner is only $6 a plate. We bought 2 tickets, not knowing what they would serve and were given a choice of chicken and something else we couldn’t understand. We chose 2 chicken plates, which the 3 of us shared.

We had been waiting all day to leave the port so we could shower. The shower is just river water and Jason’s theory would be that it would be cleaner if we were away from Belem. So we all scrubbed off 2 days of sweaty port smell with smelly brown river water and called it a night. The hammock lights had been off since 7, so it was easy to do. 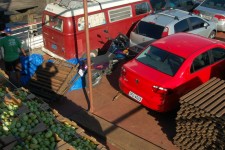 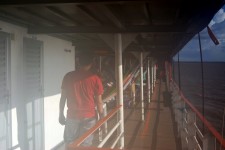 One thought on “Amazon Day 1: Ship of Fools”