Though the ship was set to sail on Saturday, we were told we’d load on Friday afternoon and could sleep on the boat. We had splurged for a cabin with A/C because we figured 6 days of Amazonian heat and bugs may well do us in. Also, Bode is not faring too well in the heat. Actually none of us are, but he’s got such sensitive skin that he’s been pretty rashy for weeks.

We got to the port just before 4 pm, as instructed, and were told to wait for about an hour. We watched a dozen or so men loading crates of tomatoes and huge sacks of flour into the ships hold down below. Sliding them down a wooden plank. Men would unload a large handcart’s worth, run down the pier until they reached our boat and then start sliding whatever they had down to the unseen men below. 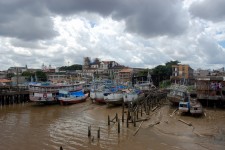 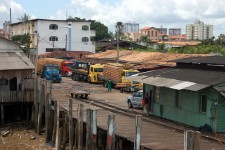 After an hour or so, someone that seemed to know what was going on had told us to move the bus closer to the boat, then managed to yell at and direct the semi drivers out of our way as we did it. Then, we sat for another few hours.

It started pouring rain, so Bode and I decided it was time to check out our camarote on the boat. Our room was exactly the length and width of 2 bunk beds, plus a tiny door between – enough floorspace for a human to stand. This was an old, worn ship with metal walls and a dim light making it seem that we were on a submarine. It did have an A/C though, and that was key. It wasn’t currently working, but we had heard that they don’t turn on the compressors until they are moving. We were optimistic. It also had an exterior bathroom which we were told was all ours and they gave us a key.

Since the room wasn’t any cooler and rain had let up a bit, we sat outside and watched as they finally started loading the cars. First, they had to build a wooden ramp so the cars could get over the railroad tracks. The boards weren’t long enough, so it involved a sort of teeter-totter element where the driver had to stop in the middle and wait for the vehicle to wobble to the other side.

Next, 2 more boards were placed from the dock to the boat, which was approximately 3 feet below. There wasn’t much space between the tracks and the end of the dock, so all this was at a strange angle to boot. Bode and I watched as the men on the boat had to hold up the boards so the cars in front of us could drive onto them, then the men on the on the dock had to lift the other as they drove down. We were very concerned about Red Beard, but his length made crossing the tracks no problem, and somehow they had gotten a better angle and Jason was not suspended nearly as long as some of the smaller cars. A huge laugh and sigh of relief from the both of us on deck, and probably from Jason in the bus as well.

But then, as Jason started locking the door, about 5 guys jumped on the bumper, rocking the bus. Jason talked to the guys and looked up to tell me they were going to jack the car over a bit. He kept talking to me assuming someone was going to get a jack with wheels. My eyes got big as I saw what was happening behind him – 5 men on each side of the bus rocking it back and forth. After a couple tries, one guy got a rope around the back tire for leverage and they told Jason to get inside and put his foot on the brake. They rocked and rocked and moved the car another 3 feet or so. Meanwhile everyone else onboard was laughing.

Jason joined us up on the 2nd deck and we watched them fit the rest of the cars onboard, it was pretty entertaining. Then for several more hours, they loaded tomatoes. Only tomatoes, until well after dark.

We were exhausted, so we ate the roasted chicken we brought with us and retired pretty early. It was an extremely hot night, so we kept opening the door to our room (we weren’t entirely comfortable leaving it open at the port when so many people were getting on and off the boat) and sitting outside of our room. We’d pulled in our fan, which Jason had modified to plug into wall sockets as well as lighter sockets, but it just wasn’t enough. There were only 3 other passengers on the boat, each in hammocks, and at that point the hammock idea seemed like a great idea. 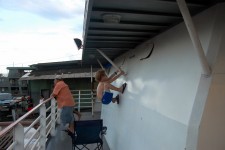 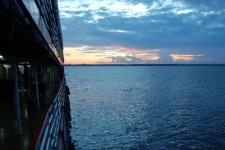