I was able to pick up an escape at a random stop on the highway – I only had to ask at two shops, but nobody had tailpipes. Still, better odds than back home. The difference here was that I ended up with a Brazilian fusca/kombi muffler. The guys at the shop also told me I was getting the wrong muffler because the Brazilian kombis only had one tailpipe stock – this one had two. It did say VW KOMBI in big letters on the muffler, though.

Later, in Olinda I searched 4 different shops for the pea-shooter tailpipes. The first 3 shops said they had them, but were out. At the 4th shop, the guy simply reached below the counter and pulled a box with 20 tailpipes in it. Done.

The car parts section of any town is always a single street (President Kennedy Street, in this case) packed with stores seemingly selling the same thing. Despite the need to go to so may shops with a muffler in my hands, I didn’t have to go very far.

I took my new score to a beach-side spot to park and start the installation. My thinking was that this was a pretty simple job and afterwards, I could just jump in the water to cool off and clean up. 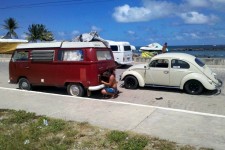 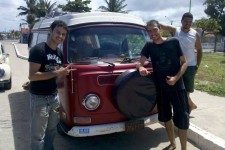 There are three major differences between the German VW muffler and the Brazilian model*.

One: no preheater tubes. Not on this one. No need to preheat anything in Brazil. Not a problem, since I’ve still got the Kadron carbs. But, it means unfilled holes in the engine tin. I cut up a soda can to cover them.

Two: no sealing rings. Just beefy clamps to squeeze down on the bare pipe. This also means that it leaks. I’m still trying ot figure this one out. It works – just not well. I’ll heat-cycle it a few times and take another look.

Three: it doesn’t actually fit. The two pipes that connect to the heater boxes are too long – by different amounts. Of course, I didn’t realize this until I had everything apart. I considered packing it all up and taking it to a shop to whack off the ends, but that would have meant re-installing my broken muffler (or not). After a bit of staring at the sea, I decided to gnaw at it with my tin snips and vice grips**. It turned out that the steel is so soft that you can just use the vice grips as a nibbler and eventually take it down to the right length (use the deck lid as a shade – it’s way too damn hot to do this work so close to the equator.)

Right as I was finishing up, two guys pulled up in a fusca an introduced themselves. There was a BBQ a block away and I was invited – filth and all. Another beetle pulled up while I went to clean up in the ocean. A few minutes later, I was at the clubhouse for the Pernambuco Cangaceiros with a cold drink in my hand… and a new hat. 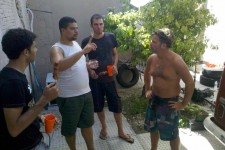 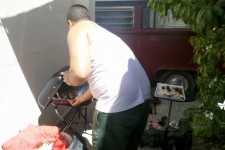 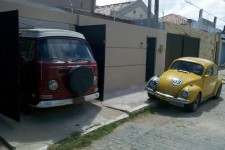 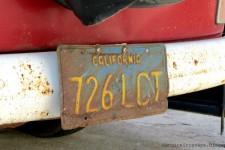 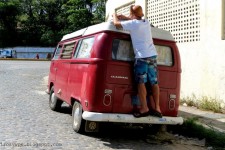 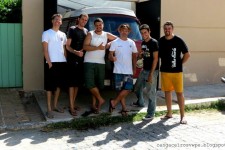 *Brazilian-made versions of the German model parts are manufactured and exported, but not sold here.

**The guys tell me that here, they just call it adaptação. Sometimes the Brazilian parts don’t fit their cars either.