Apparently, Prado is the Sturgis of Brazil. Well, that’s what we hear anyway.  We only made it here because we didn’t make it too far past Vitoria after renewing our visas. Still, we finally made it into Bahia state.

We picked Prado because we heard there was ‘good camping’. We cruised by the beach and saw no camping, so went into a local bar to see if they knew where we could stay. After our typical struggle in Portuguese, the guy says “are you American?” It turns out ‘The Captain’ is from New Orleans. He lost everything in hurricane Katrina and came here to start over. Now, his place is the epicenter of a Motociclista Brasileiro rally each year.

He moved his truck over and told us we could camp in the back and then brought out some cold beers and promised some gumbo for dinner. Sold!

We had in interesting night discussing the tribulations of moving to Brazil and running a business. Fun to hear about, but we’re not sure it’s recommended. His place is for sale, by the way. 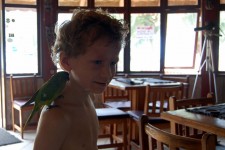 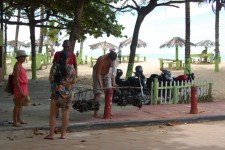 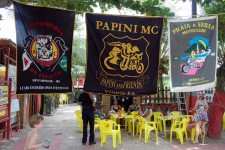 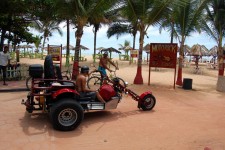 The rally didn’t start for a few days, so we had a relatively peaceful night.  They insisted we stay for the big party, but we figured we should keep moving. We saw the campsite on the way out of town.

This section of coast is tricky to navigate. All the rivers mean that you just can’t drive up the coast – zigging and  zagging is required.

Back on the BR-101, it didn’t take long before we decided we really didn’t want to be on the BR-101. Lot’s of slow moving trucks and people trying to pass them – lots of close calls – and lot’s of overturned cars down the sides of the hills.

We pulled off on the dirt and headed towards Caraiva. A long bumpy ride through tree farms to get to the river crossing, where we needed to park and take a canoe. Due to a complete lapse of judgement, I decided to just keep going. We heard the next beach was nice too – Praia Esphelo. 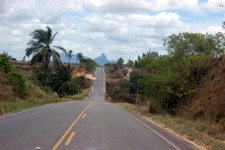 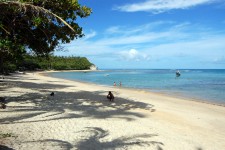 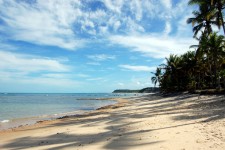 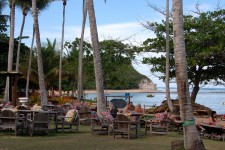 Next up was an attempt to camp in Trancoso. Again, we failed. This was supposed to be great place, but we just weren’t feeling it. So, onward in the dark to Arrial d’Ajuda.

I’m pretty sure we should have stopped back in Caraiva. Now, we know for next time… 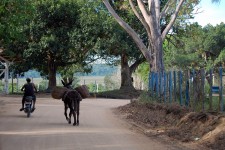