One of the reasons we intended to stay in Sucre a while was to “get some things done.” Sometimes we feel like we have all this stuff to do – and we do – but it’s usually a revolving non-specific list of things that we can never remember. We need to get something accomplished, but don’t know what it is*.

Anyway, after lingering and only getting a few things accomplished here, we decided to hit the road and head over the the highest city in the world – Potosi.  But, within a few minutes of pulling out of our camp site, we drove by a tapaceria. That’s an upholstery shop – and hey, that was on our list!

Every seat in the bus is torn (except mine) and this would be a huge thing to cross off our bus project list.  Angela had seen this place earlier and we decided to pull over and talk to the guy.  He took a quick look at the inside of the bus and said 4oo B for the whole thing. That’s about 60 bucks.

I double checked the price and he assured me it was correct. I showed him the giant cushion in the back for the bed and he nodded that it was included. I explained to him the rear bench seat construction and he nodded that he got it. The rear-facing jump seat… si, si.

This seemed a little too good to be true – the material should cost more than $60 USD. Before we agreed to go ahead, we figured we’d throw in the custom upper bed for Bode. I guarantee he’s never seen one of those before.  He didn’t skip and beat and said no problem he’ll include that too for the same price.

Just to be sure, I went over to his shop and inspected some of his work and materials. He showed me what he was working on and there was a guy in the back measuring fabrica and putting it on a machine. Granted, I saw some loose seams, but we just can’t go wrong here if the price sticks. I went back to the bus and grabbed my tools to start pulling out seats. An entire Westfalia custom re-upholstered for 60 bucks. We’ll see how well this works out in a few days.

After that, we had to figure out what to do while we wait a few more days in Sucre. Camping is out, since we now don’t have beds. We found a hostal near downtown – $15 USD a night that includes wifi and secure parking. All of our stuff is now sloshing around the inside of the bus, so it was an interesting ride around town.

After we parked, I could smell the distinct odor of what is probably my clutch, so there is potentially one more major project that could force us to stick around Sucre. I know I smoked it up pretty good climbing a few of the hills on our long trip here. Maybe it will fix itself, maybe it’s trashed. No clue.  I’ll take it for a test drive manana and try to figure it out.

*One of those things is answering email. We do try to answer all of them. This week, Justin at The Great Family Escape asked us about traveling through Peru. 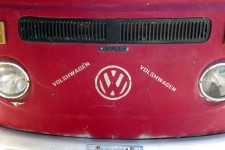 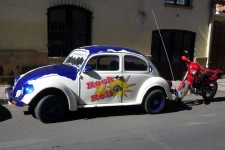