The last time I sat down and played a game of Risk was likely sometime in the 80’s. It’s been a while.

I loved playing it, of course, but I also remember it being a fairly complex multi-hour undertaking.

So, when Bode found the game board at the hostel and asked to play, I initially deferred. I assumed it would be too difficult for him and more trouble than it’s worth. He could take it out of the box and play with the pieces and we would talk about it later.

Once he saw that the pieces had guys with rifles and canons, he pleaded with me to teach him to play. He’s definitely at the stage of having that boyhood fascination with wars and weapons. He asks me for updates on the situation in Libya every day… seriously. You should hear him explain the conflict in conversation – it raises eyebrows. 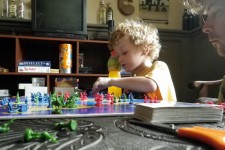 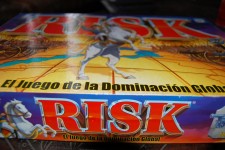 In no time we were staking claims to territories (he took Peru first) and mom was even invited into battle. He took to it immediately and after an hours-long match, he and mom had banded together to wipe dad off the map.

Aside from having fun together, we also worked on learning all the continents and oceans. Lot’s of math. Reading. Alliances. Odds. Strategies for land wars in Asia.

Maybe more importantly, he knew that Parker Brothers thinks you need to be 10+ to learn the game. When some friends walked in and were impressed with his play, he was full of pride when he told them he was only 5.  It’s a good thing they didn’t ask him about Libya.