Cuenca was a nice enough place for a  rest stop, but we needed to keep moving. Once again, we have run out of time and have to make a break for the border. We were stamped into Ecuador for 90 days and we are now on day # 88.

Plenty of travelers come through Cuenca and it’s sort of a college town, so it was nice to have some amenities. There is pleasant downtown area and a few appealing restaurants to choose from. I don’t know why, but I have tried to get Thai food twice in the past week – probably just because I’ve seen it on a menu. They’ve murdered it each time and I think I’ve learned my lesson. 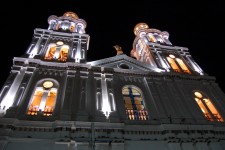 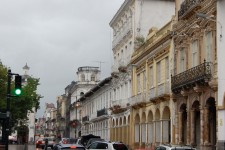 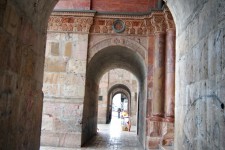 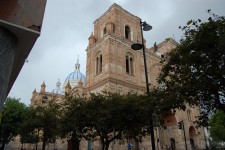 We’re still in the mountains, so we prepared to finally descend back down to sea level and cross into Peru. The past several weeks have been mostly cloudy and chilly, so we’re really ready for some sunshine and beach time.

Little did we know that half-way down, the Pan-Am would be completely shut down due to mud slides. There wasn’t much indication and I drove right around a big pile of dirt in the road (and the Devisio signs.)  I’ve gotten pretty accustomed to just driving around anything blocking the road. This time, we hit a dead end with a big pile of mud.

I’ve actually driven up and over much worse in Colombia, but this time we turned around.

There was  a guy walking down the road and I asked him how to go around and he hopped in and for the next hour or so, helped us with the detour. All dirt/mud roads way up and down switchbacks.  Some people were stuck in different parts, but we managed to power through, throwing mud all over the place. I think he was impressed. Nervous too.

Angela was supposed to take photos from the back seat, but she was hanging on too tight. 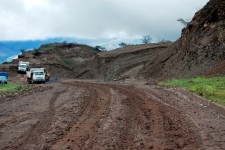 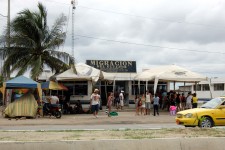 Maybe 5 hours or so after leaving Cuenca, we finally neared the border. Borders are always funny places, but this one is unique.

First, there is no gas anywhere near here. I’d guess 50 miles. There are stations, but they are all closed. Gas is $1.50 USD/gallon in Ecuador and $4 in Peru. This might have something to do with it.

About 5 km before getting to the border town of Huaquillas, we passed an aduana building. I went in and they were happy to take my Ecuador vehicle papers, but there was no one working the booth for passport stamps. No worries, there is another office ahead, they say.

A few more kilometers down the road and we saw some very obvious signs pointing to the frontera and Peru. We followed the signs to a huge new immigration station that doesn’t appear that it ever has or ever will be opened. It’s a one-way road to Peru from here, so we turned around and went the wrong way back into Ecuador toward the town.

Naturally, this is where we find another tiny little immigration office where they stamp us out of Ecuador in 30 seconds. Easy peasy. 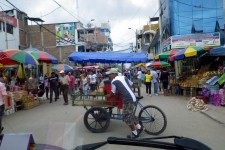 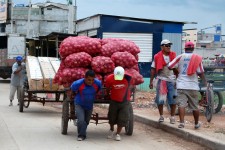 They tell us to not follow the highway signs, but enter Peru through the bridge crossing in the town. The problem is that the town has a permanent market right in the middle of the main road. People are hauling onions or bamboo or whatever between all the stalls in the middle of the street and there is no way we are getting through. I try to find my own detour and use the river as a guide to figure out where to go.

We finally make it to the bridge – wait a very long time for people, dogs, and tuk-tuks  to get out of the way – and cross to a little office right past the bridge. As we are making our way through the crowd, people are yelling “California!” and one guy even yells “Argentina!” at us. I think they’ve seen a few road-trippers here before.

Of course there are helpers here who scramble around and try to wave fake receipts in their hands, like I’m supposed to pay them for some sort of official service. As soon as I go in to the building, the one official there simply waves me on and tells me to go to the next office a few kilometers down the road. I’m still not really sure what those helpers were supposed to be helping me with. 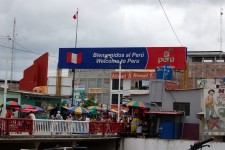 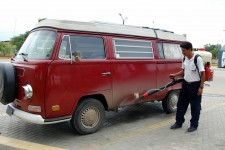 We finally made it to the next office and here we can get everything done. More helpers are here too, but they are all easily ignored. We filled out our tourist cards, have the police check them, then have immigration stamp us in for 90 days. Then, get copies of the stamps and take them to a guy in a little building who will give us our vehicle papers.

I’m the only one in the office, but for some reason this takes an excruciatingly long time. I think I filled out the same form 3 times, and he slowly entered it all into a computer, verifying every single entry with me.

Our reward was a big circular permit sticker that goes inside the windshield that says “transito.” Everything here is free – except parking, apparently.

For some reason I have to pay about $1 USD for “parking” and another $1.50 USD for fumigation.  The officials verify this.

I think the fumigation guy just sprayed soapy water on my tires – they do this at most crossings and I really don’t know why. At least 100 cars zoomed by without stopping while I was waiting for my papers. I’m pretty sure they all had the same bugs on their tires. 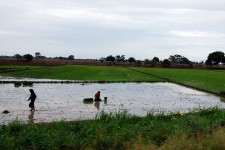 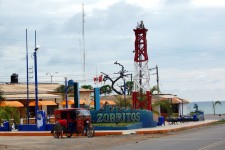 One odd thing we noticed after driving in Peru for a few minutes – rice fields. We just haven’t seen them in South America yet. 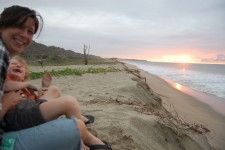 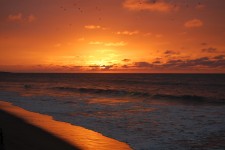 Less than an hour later, we had the pop-top up and were watching the sunset on the beach just south of Zorritos.

Beach camping – we have missed you.

One thought on “a la frontera”