We’d heard that that Baños is the type of place you end up staying longer than you had planned. This was entirely true for us. We planned on staying 2 nights, and 5 days later we finally hit the road.

The town is very touristy. Still, it’s small, walkable and touristy means easy. This also means there’s some international food – not great – but still some variety.

They are also known for their cane and taffy. People have steel sugar cane presses in front of their shops and will make you sugar cane juice on the spot for a quick treat.  The taffy is hanging on a hook from every other doorway on the main drag. When there’s a lull in business, the shop owner comes out and slams the taffy on the hook, draws it out, doubles it over, then slams if back on the hook. Some of these big-armed guys look like they work the taffy all day. 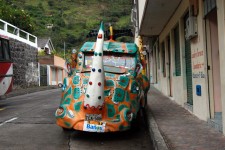 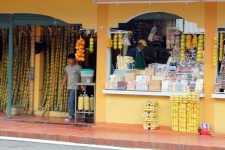 Once we did get the van in gear, we headed on to Alousi. La Nariz del Diablo–the Nose of the Devil; a train ride down an impossibly steep cliff. It’s so steep that the train has to go back and forth down switchbacks in forward and reverse.

We just learned that after a long delay, the train had just started running again only a few days ago.  The drive was incredible, but eventually the fog and rain came in.  We arrived late and decided to spend the night and wait until the next day to ride the train. The views were supposed to be amazing (and you could ride on the roof!) so we didn’t want to miss anything. 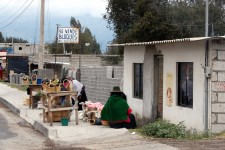 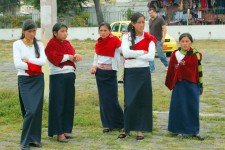 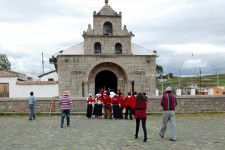 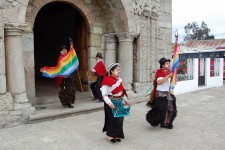 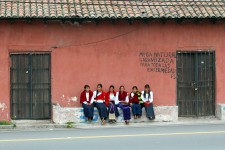 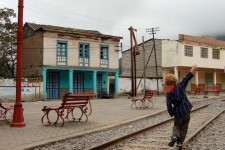 The next morning we had reservations for the 11am train, and arrived at 10am to buy the tickets, as instructed. The price had more than doubled from before the track was repaired, and you were no longer allowed on the roof. We paid anyway and then found a nearby restaurant to wait. 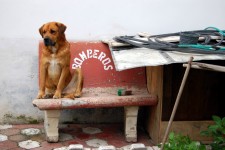 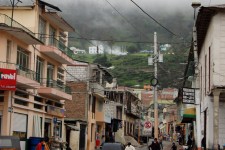 After some waiting, we discovered that there had been a mudslide, and the track was completely covered. No trains today. They eventually returned our money, but I’m pretty sure they knew about the mudslide before they took it.

We burned some kid energy on the scooter around the town square, and then took off for Cuenca.

5 thoughts on “On to the Devil’s Nose”