We spent longer than we’d planned in San Gil, Colombia. It was a nice town and had plenty for us to do. 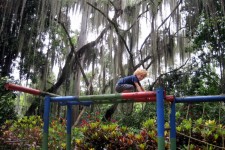 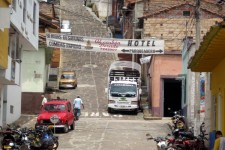 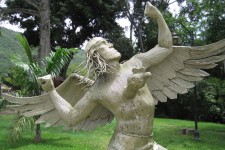 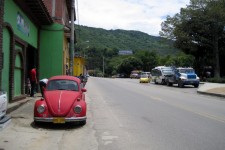 After 4 days, we finally left and headed for a nearby waterfall. Juan Curti was 20 kilometers away, but  it still took us almost an hour to get there.

The entrance to the waterfall is on a private farm, so for about $2 we could park and use the farmer’s land to get there. The hike up to the waterfall looked pretty daunting. It was far, and steep, but we set out with high hopes.

Within 5 minutes, Bode had stepped in a huge mud pit and lost both shoes. After digging out the Crocs and cleaning him off a bit, we passed through hundreds of butterflies. Life was good. 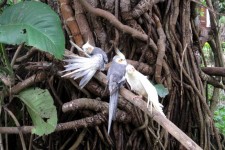 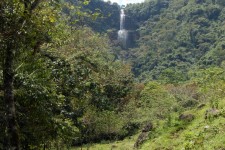 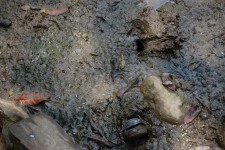 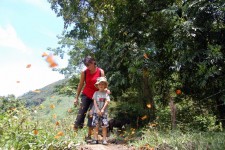 The hike up was steep and wet. When we finally got near, there was a rope across a raging river that fell a good 40 feet down. A little nerve-racking to cross with a child, but he held on tight and crossed it like a pro. Once across, we had another rope used to scale straight up to get to the pool. More of a problem for the adults, Bode was up in 2 seconds. We’d hoped to swim, but by being so near the crashing water we were already soaked and a little cold. The water was rushing quickly, and by no means safe for a 5 year old. Bode didn’t mind – he was so excited we made it up, he couldn’t stop smiling. 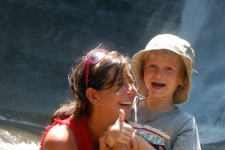 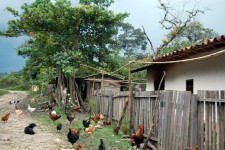 The rope down was a little steeper and more precarious. Jason went down first, and Bode had strict instructions to hold on with both hands and not let go of the rope. Then, he let go with both hands – there was  a giant spider by his hand. Luckily, I missed the spider, but I did have flashes of what could have happened had he taken one step back. Jason saw the giant hairy brown spider, and envisioned what could have happened had he left his hand there.  We were both a bit freaked out.

Back in the van, the road was rough in some places, but the views were absolutely amazing. I think Colombia has some of the most scenic countryside we’ve encountered in 10 countries.

We kept thinking that we needed to cross the large river to our right, but otherwise didn’t really know where to go.  Dirt roads, giant potholes, and driving about 10mph. There was no town in sight.  At one point, we had to back down the dirt road nearly a mile because a large dump truck was coming the other way and there was no place to pull over. Once we found a place to pull off (a house and small yard), we got stuck in the mud for a few minutes before a the lady of the house moved her blanket with coffee beans drying on it, so we could inch forward. We apologized profusely for tearing up her yard, but she didn’t seem to mind and seemed startled to see gringos driving out in her countryside. It was pretty unreal.

We back-tracked half an hour to the only bridge we had seen all day and took it. The skies turned dark, and it was only about 2pm. Lightening lit up the sky way too frequently. We could see it going horizontally between us and the next mountain.

The next road was not dirt, it was rock, and uphill. It started to storm. We finally saw people and asked a woman how far to the main highway….about 3 hours. 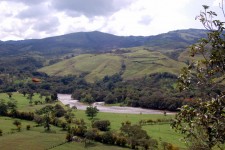 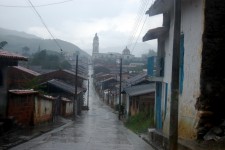 That was it. We turned around and headed back to San Gil. It was only about two hours away. On the way, we picked up an older woman walking in the rain with a large sack. We figured we’d be dropping her off quickly, but it was a good 45 minutes before she was home. That would have been one long walk in the storm.

This post is part of Photo Friday on  DeliciousBaby.  Check out the other travel photos at this site.

7 thoughts on “Lost in the Andes”