We’ve met some great people and seen some amazing scenery in San Cristobal de las Casas, so the only way we were going to get Bode out of there was a promise of swimming in a waterfall.

Our final destination of the day was Palenque, but we weren’t actually sure if we would make it. We didn’t know how long the drive was and every time we asked someone, we would get a different answer. We figured it would be between 5 and 8 hours. 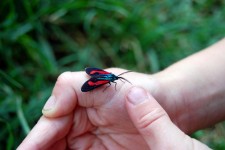 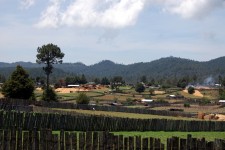 We slowly descended from the cool mountain air and pine forests near San Cristobal into the hot and humid jungles of northeastern Chiapas. Seeing the landscape change so dramatically in a single day’s drive is impressive.

We had been warned about the road being ‘dangerous’ from some other tourists and essentially dismissed the warning. There were a few federale checkpoints and they were very nice folks as always. Other than telling us we were going the wrong way to Palenque (we weren’t,) they all told us the road was safe.  As always, we have to choose what to believe considering the source.

Throughout Mexico, you often see people walking down the road with giant machetes – a tool seemingly every man carries – but there seem to be ten times more here. Everyone has machetes. It even seem cute when the little daughter gets to carry her dad’s machete. Maybe that’s why the other tourists think this road isn’t safe?

Anyway, it took us about 7 hours with the bus running like a champ. I should point out too that Bode is an awesome passenger. He did great. 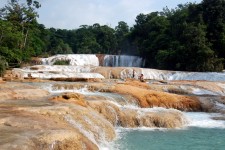 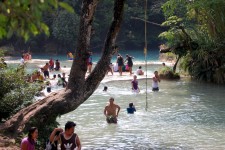 Before Palenque, we made it to Aqua Azul National Park to find many people enjoying the water on a hot, humid day. To get to the park, you have to pass through someone’s land where they hold up a rope across the road and charge you 5 pesos per person toll. Then, the park charges you another 15 pesos per person. It was the best $3.50 USD we spent all day.

The rope across the road is a new thing we’re experiencing and seems to be a common game around here. On the way, we blew past 2 young girls, maybe 6 years old, holding a string across the road. They were situated on a curve, and the string was so small that we didn’t even see it or them until we were right on it.  We think they were trying to stop us to sell us a bunch of bananas, but I can’t believe these kids were out on a highway trying to stop cars with a string. 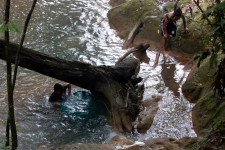 Even the cutoff road to the park is considered dangerous by some and there were sign on the way indicating that there were vigilantes here – guards, essentially. We didn’t see any, but arrived at the park to find a large group of 5 year old kids – the vigilantes, apparently – asking 10 pesos to watch the car. 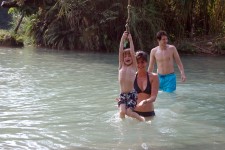 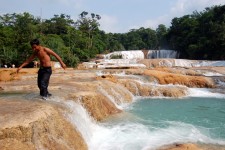 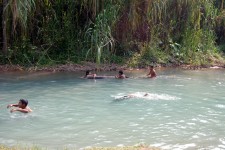 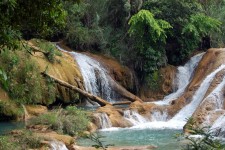 Lots of slippery rock climbing allowed us to burn up that stored energy. There seem to be thousands of cascading waterfalls one after another, and we scrambled all over them and found the best pools and chutes to play in. There was the compulsory rope swing too, so we all took a turn. We also watched some kids pull a huge log out of the forest and ride it around. Good clean fun and a great spot to cool off.