As Angela knows, I’ve got a pretty long track record of making preposterous proclamations and then actually following thorough on them. Things like, “I’m going to grow a ludicrous mustache for Chiapas” or “I’m going to drive around the world.” I just throw it out there and then do it. 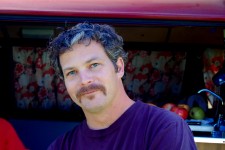 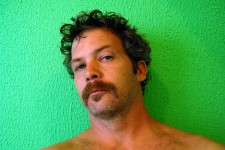 In my mind it was going to be something like a cross between Che and Ron Burgundy. What I ended up with was something more like a cheap paintbrush with a frown. Oh well, I tried.

You can’t just start growing one of these things out of the gate. That would really look stupid. You have to ease into it with the full stubble beard. After a while if it starts driving you crazy (it will,) you can carve it into the goat (as Julie noted.) Despite sporting a soul patch for the better part of a decade, I’ve determined that the goatee is almost always a bad idea. Then, finally, when it got some length, I went for it.

Since we’re behind on the photos, I’ve actually been sporting this bad boy for over a week. At first I felt pretty stupid, but eventually forgot about it. Even Angela and Bode seem to have gotten used to it. But, if I have ever looked like a compleat gringo idiot, this was the week. Fortunately, San Cristobal is a pretty good place for it.

I figure it would only take a few more weeks of growth to get the proper girth and start to look decent.  Hairstyles and mustaches follow the same length rule – no matter how bad it is, you get some bonus points for the commitment.  But (fortunately) our time in Chiapas is just about up. It’s hot, it’s itchy, and almost time for “The Guatemalan.”

12 thoughts on “Introducing “The Chiapas””