It didn’t take us long to pack up and get rolling in the morning. Going down was way easier than coming up. If you plan on coming here, note that when you get to Benito Juarez,  the road literally crosses the basketball court in the middle of town. Game on.

We got a little lost leaving town. There are only a few roads but no signs and we picked the wrong one. The guys sitting around got a pretty good chuckle at watching us come back through the court a few times. 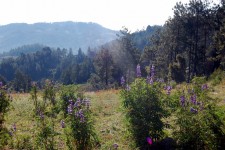 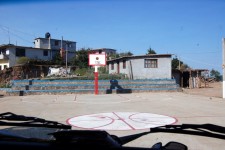 The mountain setting here is really gorgeous, with just some small farms and crops up against the hills. Wildflowers are everywhere and the locals plant even more flowers around their modest houses, barns and fences. On the drive, I started day-dreaming about having a little cabin here. This is the kind of place you could come to really get away from it all and have a very simple and peaceful life. 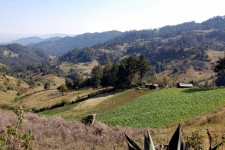 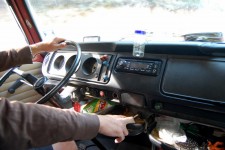 Then, I had to start paying more attention to the road. It gets steep and our prior braking issues had me on alert. Even though I was engine braking in 2nd gear, I started adding the hand brake whenever there were major stretches that required standing on the brake pedal. We stopped to check on things a few times and the front wheels were definitely getting hot (hubcaps too hot to touch.) We even stopped a while to let them cool off and added another item for the to-do list. 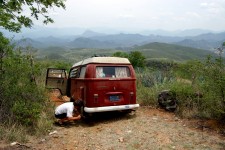 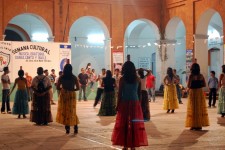 After a few hours of driving towards Santo Domingo Tehuantepec we pulled over for a quick pit-stop on the side of the road. Bad choice. I pulled up to a farm gate and when we were ready to go, it was so steep and loose that I couldn’t back out. I could get it back maybe 1 foot before we were spinning out and slipping on slick rocks. My right rear wheel wasn’t moving at all (?) and the left one was starting to lose some serious tread. Not good.

I tried digging out the big rocks with no luck. I tried making the ground more level with no luck. I flagged down a passing dump truck and he said he would come back later.

We couldn’t pull up or move the car forward at all since we were right against a locked gate. The sweat was pouring off me and I started thinking about ways to get through that gate. Maybe get the axe and chop down the posts? Start whacking the lock with the butt of the axe? Drive right through it? For some reason I was interested in brute force.

Then, I came to my senses. I can take the gate apart. After a quick inspection, it looked pretty easy, so I went and got my tools from the back. I put my socket on one of the bolt heads and started turning… and it wasn’t even finger-tight. I could literally take the gate apart with my bare hands and just move it out of the way. 5 minutes later I was turning around in the agave field and jammed back up onto the main road. After an hour of floundering and basically destroying one tire, it only took some clear thinking and 5 minutes to get out of the mess. Must be the heat.

At least we had a nice view… and the dump truck that never came back? We found him stuck on the side of the road just a few kilometers down (he already had some help.)

We made it to Tehuantepec just before dark after a long day of driving and grabbed a cheapo motel for the night. It’s no destination, but a good half-way point to San Cristobal. We walked to the main square and watched some women dancing with beer cans on their heads and then called it a night. 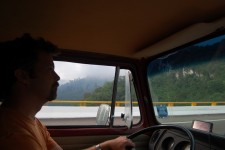 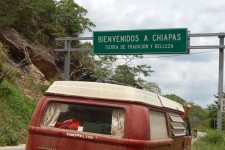 The next day’s drive was another long one. This time we didn’t pull over on any steep hills. More winding and slow steep ascents up into the Chiapas mountains. We took the toll road, so it wasn’t too bad, but spent most of the drive on the shoulder letting everyone pass. We arrived in San Cristobal near dusk. Just in time to run around with a huge swarm of fireflies (lightning bugs) at the campsite. We haven’t seen so many (any?) since we were kids. Bode loved it, but I think Angela and I had even more fun.

There were so many floating around us it was like being in a fairy land. Tough to take photos, but I tried… 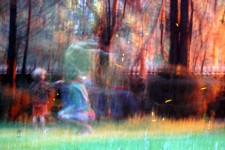 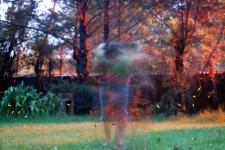 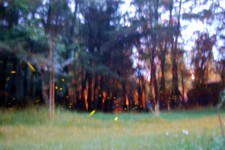 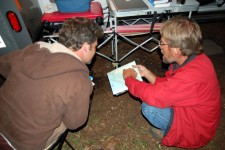 We also met Michel, who had just spent the past few months driving around Central America. We hung out at their camp and drank way too much cheap wine ($3 USD/liter!) while pouring over maps for most of the night – he had lots of tips for us.  He and his wife on their way north to San Miguel, where they plan to buy a little casa and live permanently. Adios, Canada.

4 thoughts on “It’s A Long Way To San Cristobal”