Red Beard had been sounding like a popcorn machine, so we stayed a day longer than planned in Puerto Escondido. The next travel day was supposed to be a treacherous drive through the mountains to Oaxaca, so we wanted to make sure everything was just right.

Once Jason got all the parts and fixed Red Beard, we woke up early for the road ahead. We made a quick trip to the beach to watch the surfers, but there were no waves, and no surfers. Those giant swells were completely gone. 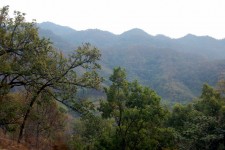 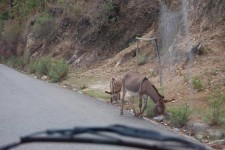 Long and winding is the best way to describe this drive. We’d heard all sorts of crazy stories about his road. It would make the driver motion-sick. It would take 10 hours (for 230 km). Mud slides. It was completely horrendous. Oh well, off we go. Like most travel stories we hear, they were highly exaggerated. People love to tell stories.

The best part? Within 15 minutes of heading inland towards the mountains, the air temperature dropped noticeably. The landscape went from beach to rain forest to mountain passes. Driving slowly was a necessity due to the curving roads, but it was the topes (speed bumps) and livestock that really slowed us down. We met cows, burros, goats, chickens, iguanas. The animals really like the road here. Dogs sleeping in potholes was a new one for us. 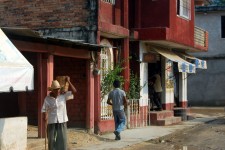 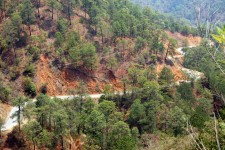 We stopped once for a photo, once to make sandwiches (which we ate as we drove) and once at at the market in Zimatlan. Our total trip time was around 9 hours – around 7 of which were actual driving. By the way, Red Beard did great. 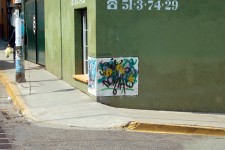 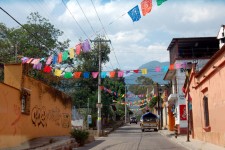 We finally arrived at our campsite late in the afternoon. It was one of the more interesting sites we’ve stayed in. The owners produce mezcal and the campsite was in an agave field. The site was high above Oaxaca and in the night there were several sounds vying for our attention.  First was what had to be the largest and loudest dog chorus in Mexico – and that’s saying something.

Competing with the dogs were the small but none the less earsplitting cicadas. There is a huge population here, and each makes the sound of a blown stereo speaker on full blast.

Lastly, there were some apparently unhappy burros in the field behind our campsite. They brayed all night, Loudly. I’m starting to rethink my idea of getting a donkey for our next family pet.

It also turns out that the governor has a ‘party house’ here just across the hill. We don’t know if it’s a fiesta party house or political party house, but his sleek red helicopter would fly right over us and land on the gigante hacienda roof a couple times a day.

Despite the noise, the campsite and town were pretty great.

We also met 2 sets of folks that were traveling from Buenos Aires. A retired couple that was actually traveling around the world – they spent 18 months in South America. And, a French family with 3 children that was driving from Buenos Aires to Montreal – their trip will last one year and they are 9 months in and moving fast. They were both in bigger and better running vehicles, and it was nice to meet folks out for long-term travel every now and then.

7 thoughts on “The Road to Oaxaca”