There’s nothing like having a few mechanical problems fixed to motivate you to get in the car and go. We were going to explore Colima state a bit more, but we were ready to get moving and put some asphalt behind us. The next stops were the beaches of Michoacan.

We got a tip to go find the km174 marker and that was the extent of the advice. Good enough for us. This turns out to be near El Faro, but not quite there. We turned off the main road and drove a few kilometers to the beach. Here we found a few palapas and a really beautiful beach with white sand and little islands offshore.

There were tenters under some palapas, so we picked one and went to the little shack where we could see women making tortillas in a big steel pan over an open fire.

“Si! No problema!” she answered with a big smile. “¿dónde está tu coche?”

With that, we had a killer libre camping spot right on the beach. We bought a refresca from her as a simple thanks and went to the bus to start cooking up Bode’s new favorite dinner. Fresh filetes de basa, rolled in flour and fried up in olive oil. Easy camp cooking that tastes great. Even Angela, the seafood skeptic, loves it. 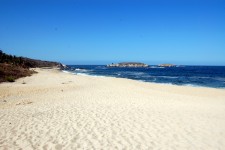 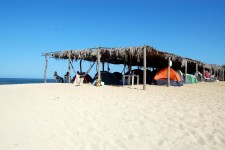 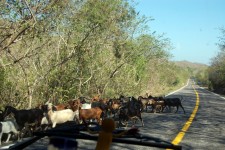 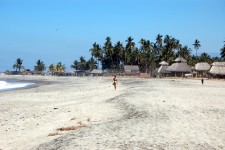 Despite all the weekend tenters, it was a quiet night. The next morning we back-tracked just north to La Ticla. This is a friend’s favorite surf spot, but came with warnings about safety. It’s a sleepy town, but where the road ends at the beach is a huge “bone-crushing” break and lots of stoked surfers. The waves were huge and even the undertow in the shore break was a little scary. We weren’t getting in. We watched a bit and decided we would be better off heading south – not much for us to do here.

Next up was a stop at Maruata. This place was recommended by several people so we knew it had to be good. We drove in to town and followed a car to the north end (they must know where they’re going, right?) and had a look around. We decided there must be more, so we drove back through town and made the turn to the southern beach. Once we found it, it was an obviously better choice.

We cruised along the row of palapas looking for a good place to camp when we spotted a familiar coche. There was Emma and the Bullis. Even more serendipitous – lunch was ready and they had plenty. 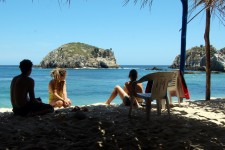 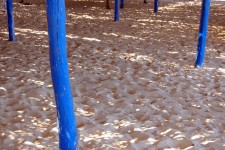 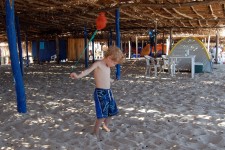 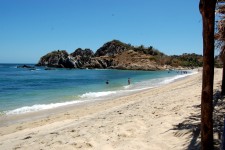 It was a great spot and the kids were happy to play together on the beach. It’s a protected beautifully curving cove with warm water and gentle waves. Not much in the way of surfing here, but excellent wading and boogie-boarding for everyone. Total cost to camp on the beach was about 70 pesos for the night – about $5.

There were more tenters here too – weekend tent camping on the beach seems to be a growing popular trend among Mexicans – a good sign. Michoacan is the perfect destination – no hotels or development – just miles and miles of beach and the occasional palapa restaurant. Next door was a restaurant completely filled with tents – no tables or chairs – and happy campers ordering up tacos and tortas all evening. 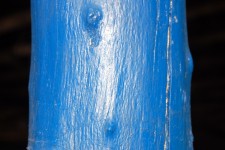 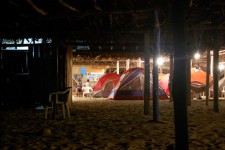 We met some guys who came over for some hot water. Ramen noodles were on their menu for the evening. 3 pesos per cup, they bragged. They were all students from Colima and they came to the beach to relax. They brought over whiskey and tequila as compensation for boiling their water for them – I had a sip to be nice, but tequila-drinking was not going to happen this evening for anyone in our group.

They were nice enough guys and I got to practice my terrible Spanish with them. One of the guys was an architecture student and the other two were – get this – culinary students. Ramen noodles for dinner and they needed help boiling water? Oh well, they were students after all. I remember. But, back then the Ramen was 10 for a dollar .

6 thoughts on “Back in the Sand”