We decided to spend a bit more time in the mountains before heading for the beaches since the weather was so nice and we really wanted to see more of the highlands. We could spend weeks in Michoacan and still not see it all, and decided to save some for next time and head west.

It was a long day of driving over to Mazamitla – just south of Lake Chapala and almost back to Guadalajara. This place was recommended by several folks we’ve met along the way so we thought we may as well check it out. 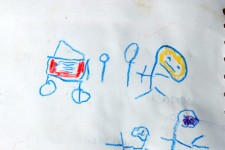 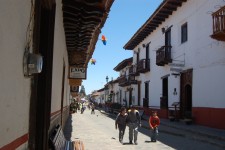 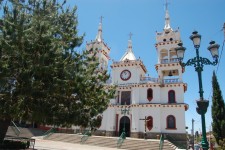 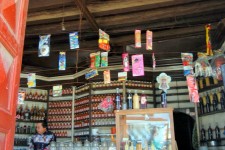 It’s another nice place and we wandered the streets and had some good tacos at the cleanest and nicest mercado in Mexico. It’s nice, but kinda boring, actually. The town seems almost like a Swiss village, with whitewashed shops full of handmade cheeses and rompope. Let’s face it, when you have a hankering for rompope, you just can’t get good rompope anywhere else. 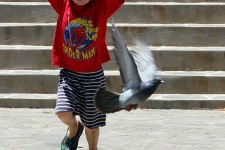 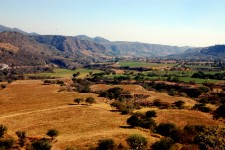 We camped just outside of town, but it didn’t take us long to tire of Mazamitla and hit the road again. Time to bag another state – on to Colima. It’s a small state, so we didn’t have much on the itinerary – lounge in Comala and eat lots of tapas. Maybe head up to the volcano or find a waterfall.

The drive to Comala was a little more exciting than we expected. The libre road was sinuous and we ascended and descended continuously. For the fist time ever, we saw signs that said to use engine braking, “Frenos con motor!” After a while, we could see the barely-visible and still-active volcano hovering above us. The entire cinder cone is a gray-white color, so it blends into even a perfectly clear sky. 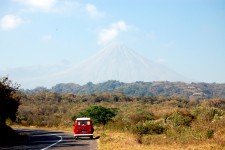 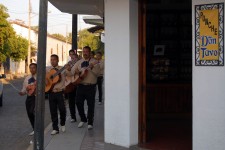 We did use engine braking on the steep descents, but once again we learned that we could boil brake fluid… twice. The first time, the pedal went to the floor and we stopped with the emergency brake and let things cool off with no other problems. The second time was the killer. This time, even after cooling and lot’s of bleeding, the pedal was extremely stiff and braking was tough. Fortunately, we were only about 5 km from Comala. We coasted slowly into town and grabbed a hostal for the evening to figure things out. 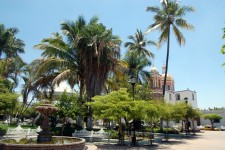 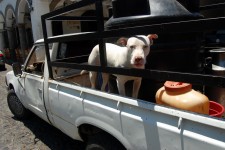 The next day I found the local parts place and ordered up a new maestro cylindro. My assumption was that the valve that lets fluid back into the reservoir was toast and that’s why the pedal was so hard. I could bleed the brakes easily, but the pedal stayed high and stiff with minimal braking no matter what. It was a heating issue, so the booster shouldn’t have been affected.

We only had to wait a few hours for the part to come from Colima city, so we went to find those tapas. Comala is a quiet little town with the usual town square and big church. The difference here was palm trees – we’re definitely closer to the coast. One side of the town square is a row of tapas restaurants where you sit down and order a limonada and the plates of food just start arriving. All good stuff.

Later, I picked up the part and decided to wait until the cool morning to get filthy and install it. In the morning, I took the old one out it wasn’t hard to notice that the new master cylinder wasn’t quite right. First, the reservoir ports were the wrong size. Second, two of the fluid lines were in different locations. I headed back to the parts guy and took both maestros. “No problema,” he said. Come back in a few hours. 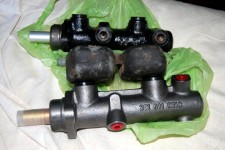 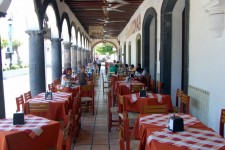 I came back and there were the correct rubber seals in the reservoir ports, but it was the same master. That’s the best he could do. I had no choice but to try it and do some brake line bending.

After much effort, the new master went in and I commenced bleeding a ridiculous amount of fluid through the system. The pedal stayed unusually high, but the brakes bled well and had the usual sponginess. I took it for a test drive and it did brake, but not as well as before. Now it felt like I had no booster. More checking and more bleeding, but there wasn’t much I could do. We decided to drive it the 10 km to the capital city of Colima, where maybe we would have more luck with parts once we figured it out.

We barely made it out of Comala when the magic event occurred… “Pop!” Some sort of mechanical sounding thud and the pedal went almost to the floor again… and now I could feel the booster kick in. We pulled over and did more bleeding with no change. Now the pedal goes almost to the floor before braking, but it does brake fairly well. I’d been working on my brakes on cobblestone and dirt roads all day and was completely filthy. Brake fluid in the eye twice. This sucks.

I’m still scratching my head over this one, but now I figured the original problem of the high stiff pedal resolved itself (stuck caliper piston?) and now the new (likely incorrect) master was the problem. We pulled over to a gloriously paved Soriana parking lot in Colima and I went to work. Out came the new master and in went the old one (never throw away the old part until everything works!) A very quick bleed and the brakes were completely back to normal. Perfect braking exactly as it was a few days earlier.

I’ve thought about it some more, but have now decided to not think about it anymore. It’s fixed. On to the beach.

Also, I’ve got slightly used weird Mexican master cylinder if anyone wants it.

6 thoughts on “The New Maestro”