We still don’t know what’s going on, but we’ve being well cared for. After being fairly self-sufficient for so long, it’s a big change. There is a definite communication gap, but mostly I think we aren’t supposed to be bothered with the details.

I was a little worried as Bode was showing the signs of an exhaustion meltdown at 8:30 and we hadn’t left for dinner. He and Juanito had been Wii boxing and we thought they might be wiped out for the  rest of the evening, but they continued on. I was told we were going to sushi and thought I might be dealing with a cranky 4 year old in a quiet restaurant. At 9, Juan says “lets go,” and Jason and I hop up and stand by the door with bags on our arms. In reality, ‘let’s go’ just means that the entire family just begins getting ready – grandparents, cousins and all go put on their layers. Here, 70 degrees warrants jackets and long pants. By 10 pm we arrive at a friend’s restaurant/cart and order up one of everything. They literally have everything here – deep fried cheese and shrimp on a stick, regular Mexican fare, sushi, hamburgers and even clam chowder. Luckily, with 4 other kids around, Bode gets his 3rd wind and scarfs up his sushi without incident.

The late night culture here makes sense. The late afternoon siesta keeps everyone from the heat of the day. Families go back out after the sun is down. We’re just having a hard time adjusting to it. 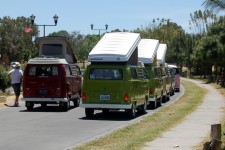 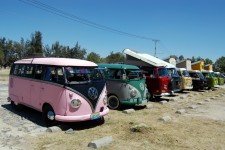 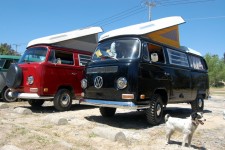 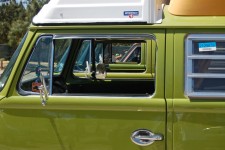 Juan lets us know that Volks Bros. TV has decided to film some footage of Westfalia’s at noon the next day and we were part of the plan. Where should we go? “Don’t worry” is the reply.

We’re home just before midnight, and more exhausted than we’ve been in a while. We fall asleep immediately.

Mr. Raffa, the security guard sleeps 20 feet from our car on a cot surrounded by makeshift cardboard walls and a newspaper roof. The bathroom is nice, but there is no shower. The shop is the cleanest I’ve ever seen, but we still seem covered in dirt by the end of the day. All we can do is bathe with baby wipes. 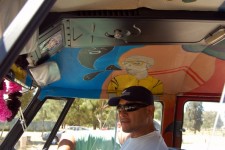 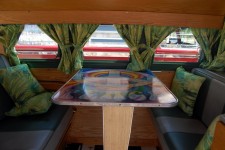 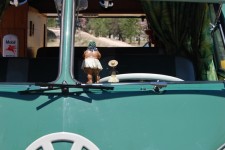 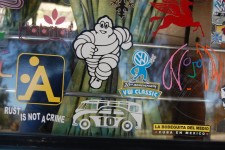 Juan shows up that morning with a mechanic to look at the sputtering problem. He offers a few simple solutions and suggest we upgrade to the premium gasoline, tighten the #1 valve, and increase the spark gap on #1 as well. We haven’t had time to clean out the van before the shoot, but we’re told not to worry. Someone will wash it while we go get tortas abogaddha. This is a Guadalajara specialty that is a hard-bread sandwich drowned in sauce. It’s a squishy delicious mess.

We return to our now-clean bus and  it won’t start. No worries – they give us a jump start and we’re off  to the video shoot in the park. We’re not trying to be media whores… we’re just along for the ride at this point.

Twelve or so other buses show up and we all chat as much as we’re able. We drove around with the tops popped in some sort of choreographed manner and much video was shot – we just followed whatever everyone else was doing. It was fun and we met some more cool folks.

Bode, Juanito and I spent most of our time at the play structures and carnival rides while Jason did the VW thing. By the way, playgrounds with missing flooring are SO much more fun than the safe ones we had back in the US. 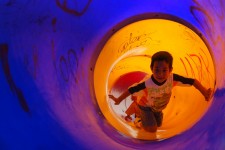 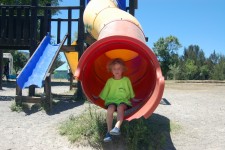 Jason had spent the previous day working on every possible fix anyone had suggested – like installing all new vacuum hoses. I can’t believe I even know these things. Unfortunately, we still think we need a new brake booster. At least we’re among folks that may know where to get one. We had carried an extra all around the US (thanks Kris!) because of some other issue, but ultimately decided we didn’t need it. We ditched it back in Texas to save space, doh!

Anyway, someone at the park knew a brake guy and made a call. Within half an hour he was at the park and would rebuild the booster for about 1/4 the price of buying a rebuilt one in the US. And, he would do everything – we just had to hang out at the park. Just pull the van over into the shade, and he’d be done in about an hour. 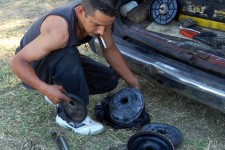 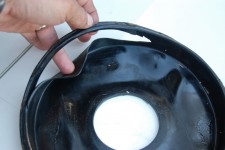 After getting it out, the diaphragm was ripped and it smelled like gas. I took this as a bad sign from Jason’s reaction. The brake guy pulled out a big bag of black rubber diaphragms and dumped them on the grass and sorted through them until he found the correct one.

He worked with a hammer and a dangling cigarette for about 2 hours. At one point I was holding his baby while his wife sat in the drivers seat and pushed the brakes for him. Luckily we were at a park, and amazingly Bode doesn’t think any of this was weird.

We tested the brakes and they worked great, so the brake guy and his family left. After the last VW left the park meadow, Jason thought it would be a good time for a tune up or to adjust something… whatever. Well, this meant 3 attempts at push-starting the car. I tried to get Bode to take a picture of this, but he was too busy.

We can now stop on a peso and the engine doesn’t die, but now our alternator isn’t working right. It’s always something. 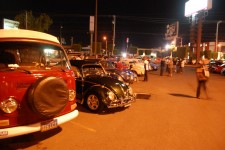 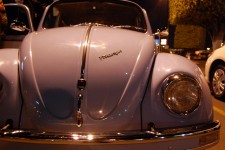 We finally got going and arrived back at Yesus’ Garage minutes before we were picked up for the big Volks Bros. Club meeting. We weren’t entirely sure what this meant, but turns out the club members meet at a large grocery store parking lot and chat. I think it may have been an anniversary get together as well. Bode and I spent most of the evening at a fast food place with a huge playscape. The meet was supposed to go until 12 or 1, but since we have our own wheels this time we left at 10 pm… after a jump start.

Again, exhaustion reigns and we sleep through the barking dogs and hot rods roaming the streets late into the night.