Today we didn’t really have a destination as much as a general direction. We headed south, avoiding the newer toll roads and took the free (“libre”) backroads through the small towns. We spent a fair amount of time behind slow trucks, farm equipment and a never-ending number of topes. No matter, we weren’t really in a hurry.

The buses are in a hurry. The local buses here have an impressive amount of acceleration and will pass you on any curve or hill regardless of perceived danger or oncoming traffic. You will pay attention.

We decided to head down to Teacapan and find a camping spot right on the beach. It’s mostly farm land and a very nice and slow drive. When we got to Escuinapa, I looked over to see the Policia standing on the side of the road and waving me over. Great. I tell Angela to get ready for the ole’ back and forth and that these guys were going to try to liberate some cash from us. Even if it takes an hour, we’ll stand our ground and won’t hand out any propinas.

Communication is tough because of my limited Spanish, but they tell me I was speeding.  They have no radar and I never saw any signs, so I actually don’t know if I was or not (doubtful.) They take my license and go back to congregate behind the bus and I expect the worst. The kind officer comes back and tells me to slow down and have a nice day and we’re free to go. What about all those bribes and crooked cops we’ve been hearing and reading about? 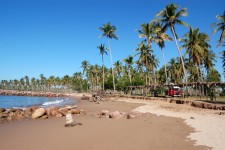 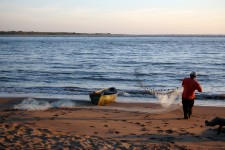 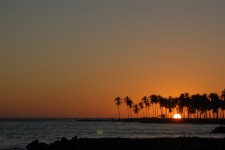 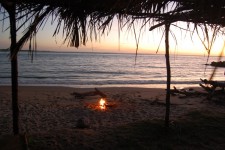 We found a nice spot just outside of Teacapan right on the beach with a palapa for a whopping $6 USD a night.

One fisherman walks up with the largest shrimp I’ve ever seen and is looking to sell. When he walked up, I thought he was holding lobster! I was plenty tempted, but we already had food we needed to eat and I didn’t want to store the shrimp. I’ve been thinking about those shrimp ever since.

A bit later, another local fisherman and his two sons row up in front of us and spread their nets just offshore and then pull them in from the beach.

I don’t know what it is about watching other people do strenuous manual labor that is so relaxing. It just is.

They catch about 20 medium keepers, throw back two giant puffer fish and a ray and are on their way. Bode watches the entire process from 2 feet away and they don’t mind at all.

We start a fire, cook some dinner and have a nice quiet evening with just us and the mosquitos. It’s quiet. Muy tranquillo. 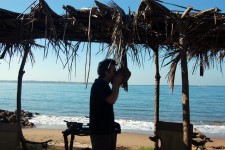 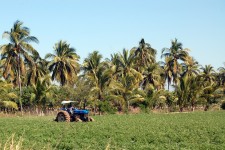 We sleep great and then lazily start the next day with some fresh coconut from one of the nearby trees. I’ve missed my regular dose of macapuno from Tucker’s in Alameda. And, it feels good to put the axe to use on something other than dead wood.

Also, if anyone’s interested, we’re featured on the Drive the Americas web site today. It’s a neat site that is aiming to be the central source of information for driving all of the Americas. There’s lots of useful information there, so if you have any interest in what’s involved in, say, crossing the Honduran border, then you should check it out.

5 thoughts on “Camping in Coconuts”