The next morning we got up and headed out for the rough ride ahead. There are a few more miles of new pavement south of Puertocitas, but after that it just ends. “Fin” is written on the road where it turns to dirt. 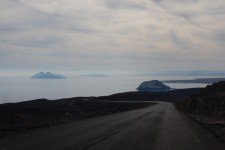 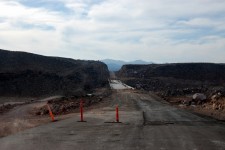 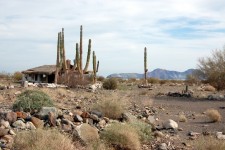 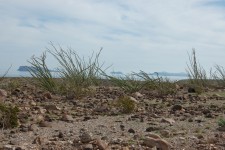 Jason loved the drive. It was bumpy and we never made it out of second gear, but I think it was easier than a paved highway full of potholes. There were actually lots of paths weaving on and off the ‘main’ path and you just choose the one the looks the best – they all meet up. Sometimes we picked the best route and sometimes we didn’t. We only bottomed-out once.

There was another military checkpoint just before Bahia de Gonzaga. They insisted on a half-hearted vehicle inspection and this time they recorded our names and license plate. This time, Bode noticed the military guys in the van. He thought it was pretty cool.

Our day’s drive was about 40 miles in about 4 hours. Faster than expected. 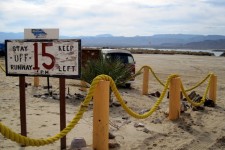 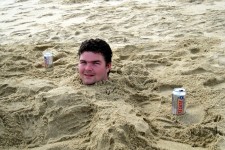 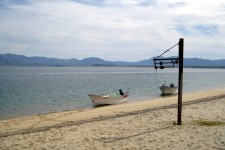 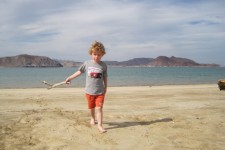 There in the desert, four hours in either direction to any other paved road is a Mini market with everything. Even soy milk for 20 pesos ($1.60). There’s a gas station here too, but they were out of fuel and they didn’t know when they’d get it. The market also rents palapas by the beach ($10), so we stayed on the beach again. Still no running water, but even the outhouses had a great view.

Besides the mini-mart, Gonzaga Bay has an dirt runway and 2 restaurants. It has about 20 “houses” on the beach and some aging RVs that are in various stages of being converting into more permanent housing. The houses all have boats, jet skis and ATVs, and all have U.S. license plates. 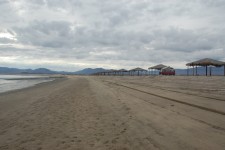 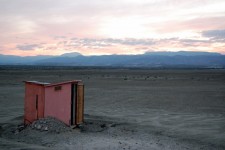 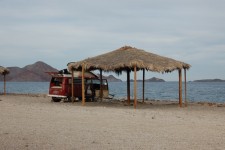 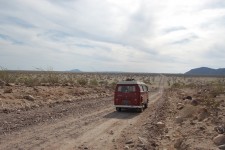 Bode and I went searching for seashells and came back with quite a collection.

One thought on “Gonzaga Bay”