We headed across New Mexico to the Gila National Forest. The Cliff Dwellings and hot springs are 2 hours from the closest town of Silver City. The drive was stellar. There are towers of rock that formed these amazing structures. I’ve never seen anything like them.

We arrived after 4 so we headed to the privately owned hot springs a coupe miles from the park. Sweet deal. 3 different pools, all with a beautiful red rock cliff background. We decided to camp there, despite the dropping temperatures. The hot springs were about 10 steps from our van, so we could easily have a dip to warm up. We were pretty cold overnight and woke to find ice on the walls of the van. Everything was frozen and we waited as long as we could for the sun to come over the mountains and hit the van before getting out of bed. A quick soak in the hot springs warmed us right up, and we bundled up for our hike to the cave dwellings. 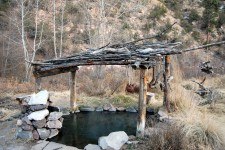 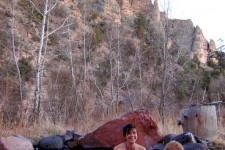 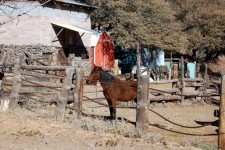 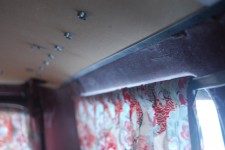 When we reached the Visitor’s Center we found out it had reached 10 degrees the night before. I’ve put a moratorium on camping below 25 now. Bode LOVES visitor’s centers. Everywhere we go he asks if there is one. Anyway, we spent a long time inside the Gila VC watching a film and looking at the artifacts they’ve found in the cliffs….and warming up.

From the photos, we were a bit skeptical. They didn’t look as cool as the photos we’ve seen of Mesa Verde, but we aren’t planning to go that far north. But after the 30 minute hike, which started with snowball fights and ended with us taking off our gloves and jackets in the warm sunshine,  we were in awe. The 7 caves served as home to the Mogollon people who lived in this area over 700 years ago…and they let us hike right through them. Pretty awesome. 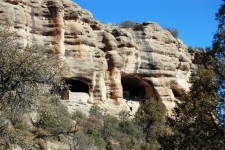 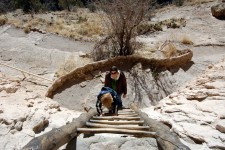 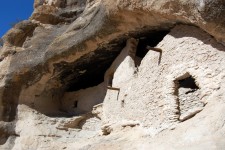 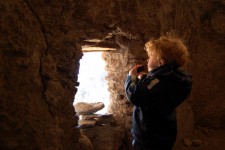 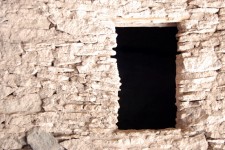 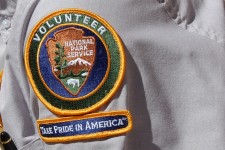