The thing we’ve noticed about the East Coast is that they love their Turnpikes. Toll roads. Whatever. You can’t avoid them. They are everywhere. Nowhere else in the country do people have to pay to drive on what is deliberately named a freeway. Anyway, we took the Turnpike down to DC. It probably cost $20 by the end of the day, $2.85 at a time.

Back at the beginning of the trip, we went to the Busfest in Vallejo, CA on our way out of town. I took a picture of a cool bus sporting a sticker that said “Why are you still behind me? Go around!” Since we were transitioning to a new slower lifestyle, I made a comment on the blog that we needed one of these on our bus. Thanks to the wonders of the internet, only a few days later I got an email from the guy who designed it, Raul. It turns out it’s not a sticker – it’s a magnet! It also turns out he wants me to have it and ships it out ASAP!  The problem is that it took us a while to coordinate shipping logistics via my father, so we just got it in New Jersey, almost three months later. Just in time for the Turnpike.

Driving the bus on the Jersey Turnpike is not, ummmm…. enjoyable. We survived, and even had a few people slow down beside us and mouth a few comments over to us. We think they were encouraging words – really. One of them was a Westy Vanagon, the first VW bus of any kind we’ve seen since Wyoming – a long drought. 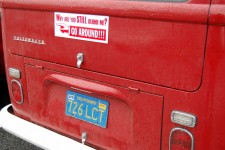