After Milwaukee, we made tracks towards Illinois. It didn’t take long before we noticed that on this stretch of road, some people were pointing and laughing at us when they passed. It was mostly moms in SUVs with kids all staring and laughing.  We still don’t know what was so funny, but we figured there were a couple of possibilities. Either the mom’s were recalling their funny childhood VW bus stories with their kids, or they were warning their kids to do their homework or they would end up driving a jalopy like ours  instead of their SUV with heated seats and DVD players. It gets so cold here that the lakes freeze and people drive on them – heated seats might be a good idea.

We got an unusual welcome to Illinois at the toll booth. The guy sticks his head out and says “what in the world brings you to this God-forsaken state?”

“Just passing through” was the best I could come up with.

We got a late start, the bus was running well and we were in the mood to cover some ground, so we drove right through Chicago (we have both been there a few times already) and into Indiana.  I had no idea that the interstates were all toll roads. For some reason I always assumed federal tax dollars covered the interstates.

Anyway, another strange stop just across the border in Indiana. I start filling up the tank and the guy next to me wants to chat… and insists that the bus must be worth over fifty thousand dollars. I assure him its not, but he keeps insisting “no, no, that’s worth more than a house.” I don’t really know what’s up with this guy, but he’s starting to get a little too interested in the bus. Just then Angela comes out of the convenience store and we both give each other the wide-eyed look and we’re out of there 20 seconds later. She and Bode had gone in to use the facilities. They were told to go around back. They did – but there were no facilities around back – just people peeing in the bushes.

We drove a bit longer until we were tired and found a cheapy motel in La Porte.  I’d never heard of the place, but a few days later we got an invite to visit someone in La Porte if we ever passed through. Another reason to improve our blog-lag.

The next day were were off to our usual late start (and we didn’t realize we changed time zones) and did some more mindless toll-way driving to Brunswick, Ohio to visit another friend.  Mandy and her two girls, Blaire and Emma, generously let us come stay and made a great dinner for us. I even got to do some handyman work.

The girls entertained Bode with Wii games and I think he now has a taste for Olympic ski jumping. We all stayed up way too late catching up.  The last time we saw Mandy, she was was at our place in Alameda for a girls’ trip.  This was the weekend that Angela was in Napa and Bode and I stayed home and decided to go buy a VW bus. The rest is history, so Mandy gets to share partial credit (or blame) for enabling this trip 😉 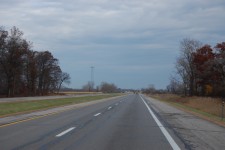 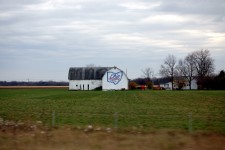 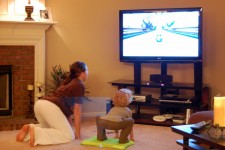 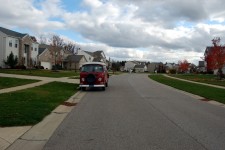 I couldn’t help but notice how strange the bus looked parked in the subdivision the next day.  It was sort of like a ghost town, with no people or cars to be seen.

What followed was supposed to be more uneventful driving, but we had a pretty close call with a car careening off the median just outside of Cleveland. We were in the middle lane of a three-lane highway – an unusual position for us, but we had just merged highways – and all of a sudden the only car ahead of us in the left lane just smashes into the center median… hard. Not sure what caused it, but they immediately spun around and started sliding across the road directly in front of us. I hit the brakes and time stood still while we just waited/hoped they would continue to slide across the road to the shoulder. I just stayed on the brakes and watched intently – not knowing where they would end up or whether I would hit another car trying to avoid them. We missed them by maybe twenty feet. If we would have been in the right lane, we would not have missed them.

After a few seconds we recovered from the initial shock, we saw that other folks were stopping to help, and we were lucky enough to just take deep breath, shake off the scare and keep going. We had our sights set on Niagara Falls – it was sort of on the way to NYC.

It was cold, but we enjoyed checking out the falls. It’s an impressive amount of water. We were pretty much just here to look, so mission accomplished. I didn’t expect to see a giant statue of Nikola Tesla – much less people taking their photos in front of it, but there you go. Build a giant statue of anyone and people will take their photos in front of it. 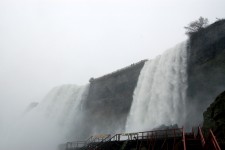 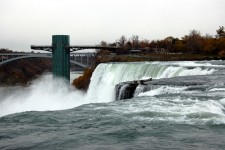 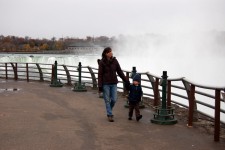 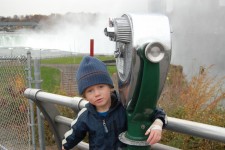 True story:  years ago my friend Joe decided it would be nice to drive up to Niagara Falls with his girlfriend for a long weekend. Of course, she was interested in going. She had apparently concocted the idea that Joe intended to propose marriage on this particular weekend. Joe was clueless. Not long after the weekend was over and they started the drive home, she burst into tears and demanded he explain what was wrong and why he didn’t propose. Joe was clueless.  Needless to say, by the time they made it home, Joe no longer had a girlfriend.

7 thoughts on “Signed, Clueless in Niagara”